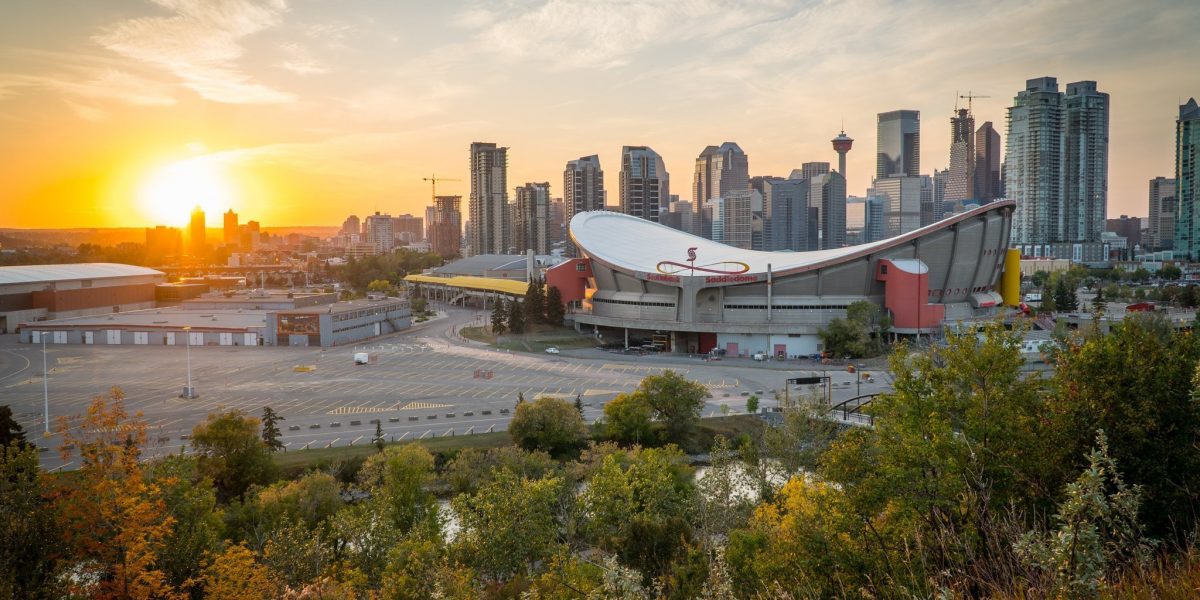 Travel Guide: Things to See & Do in Calgary

Calgary is an energetic city in Alberta, Canada, in a picturesque river valley at the joining of the Elbow and Bow rivers. As the heart of Canada’s New West, Calgary is a dynamic jump off to enjoy the natural wonders and national parks nearby.

The city is surrounded by rolling foothills and prairies, and only 80 km from the sprawling rugged Rocky Mountains or the sandstone Badlands.  I would encourage anyone landing in Calgary to spend at least a few days inside the city to take in some of the fantastic sights before adventuring beyond.

Calgary is a very outdoors orientated city, with kilometres of amazing biking and walking paths, and some incredible parks that protect and celebrate the natural landscapes. It also has several world class museums, cultural sites and new-found love of architecture. There are also several key nightlife and dining areas that are well worth exploring.

Here are the top things to see & do if you visiting Calgary: 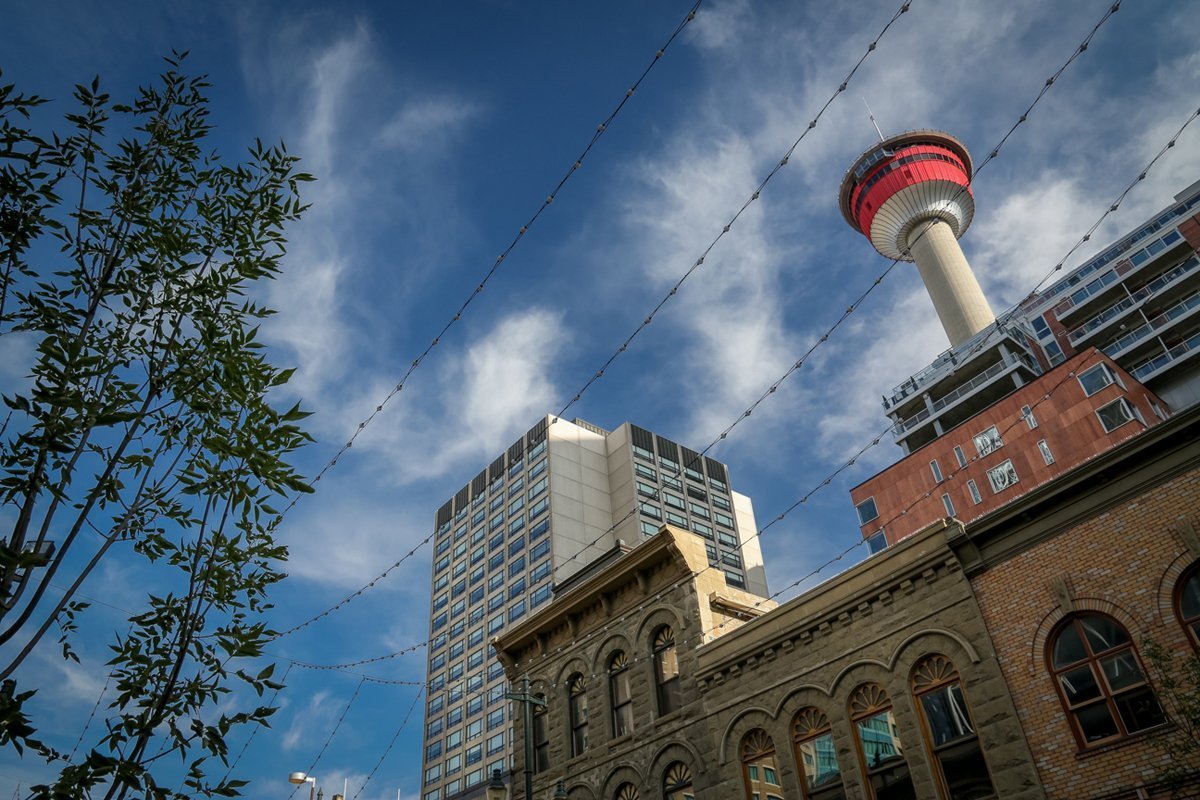 The most iconic landmark in the city, the 190.8 (626 ft) free standing observation tower is located in the downtown core of Calgary. Originally named the Husky Tower when it opened in 1968, it was the tallest building in Calgary and second largest in Canada at the time, other than the CN tower in Toronto. The building is a founding member of the World Federation of Great Towers, renamed the Calgary tower in 1971.

A massive natural gas-fuelled flame at its top was added for the 1988 Winter Olympic games and is still reignited for special events like Canada day and major hockey games. A massive multi-colour lighting system was also added around the crown of the tower, and the display can create an intricate lighting of over 16.5 million combinations for any event being celebrated in the city.

The Calgary Tower also features a revolving restaurant, the Sky360. It completes a full rotation every 45 minutes in the day, and 60 minutes in the evening, which gives a spectacular view over the city. At the base of the tower is connected to Calgary’s massive +15 walkway, a network of skywalks connecting many of the downtown core’s buildings. 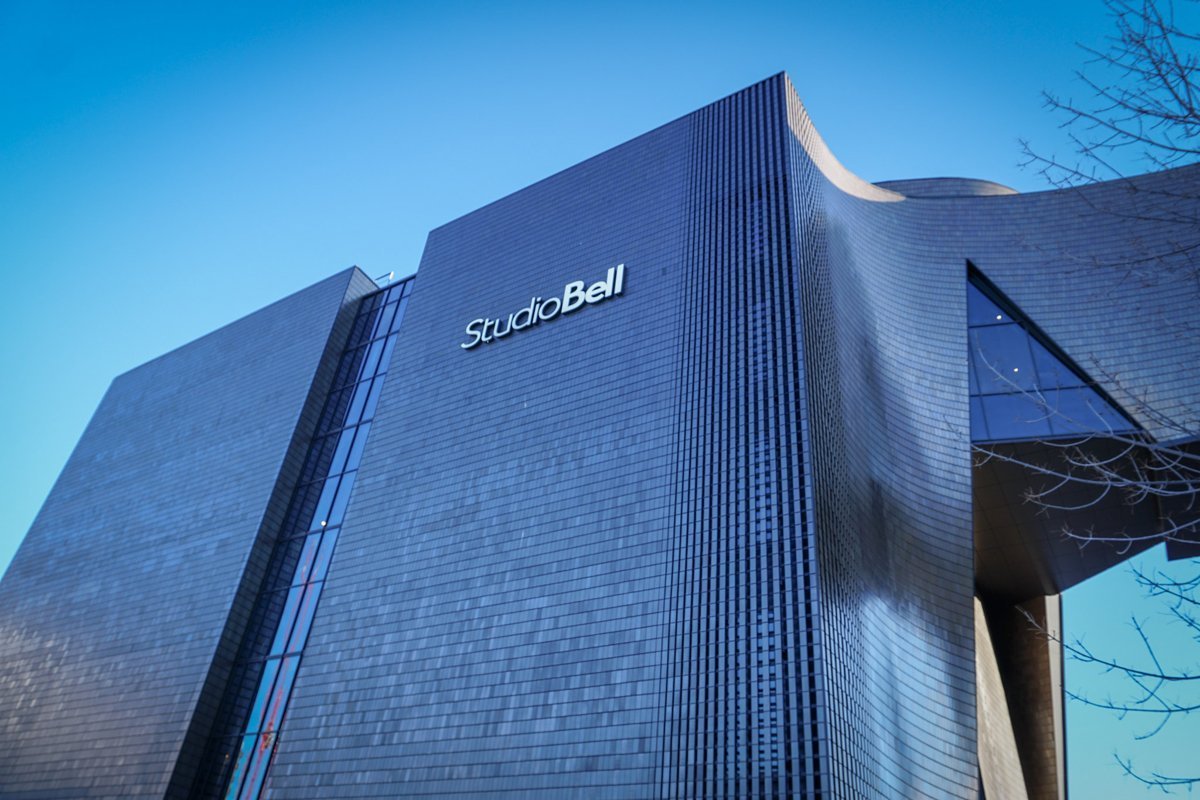 The National Music Centre and Studio Bell, is a monument to Canada’s global contribution to music, and a must see when visiting the city. Located in the up and coming area of Downtown’s East Village, the building has some of Calgary’s most unique architecture, designed by Portland architect Brad Cloepfil.

The building spans 9 interlocking towers overlooking the Bow River and is packed with exhibits, concert spaces and showcases over 2,000 rare instruments and artifacts! The complex also incorporates one of Calgary’s oldest buildings, the revitalized King Edward Hotel, and its legendary blues club. Do the guided tour to really appreciate this incredible place. 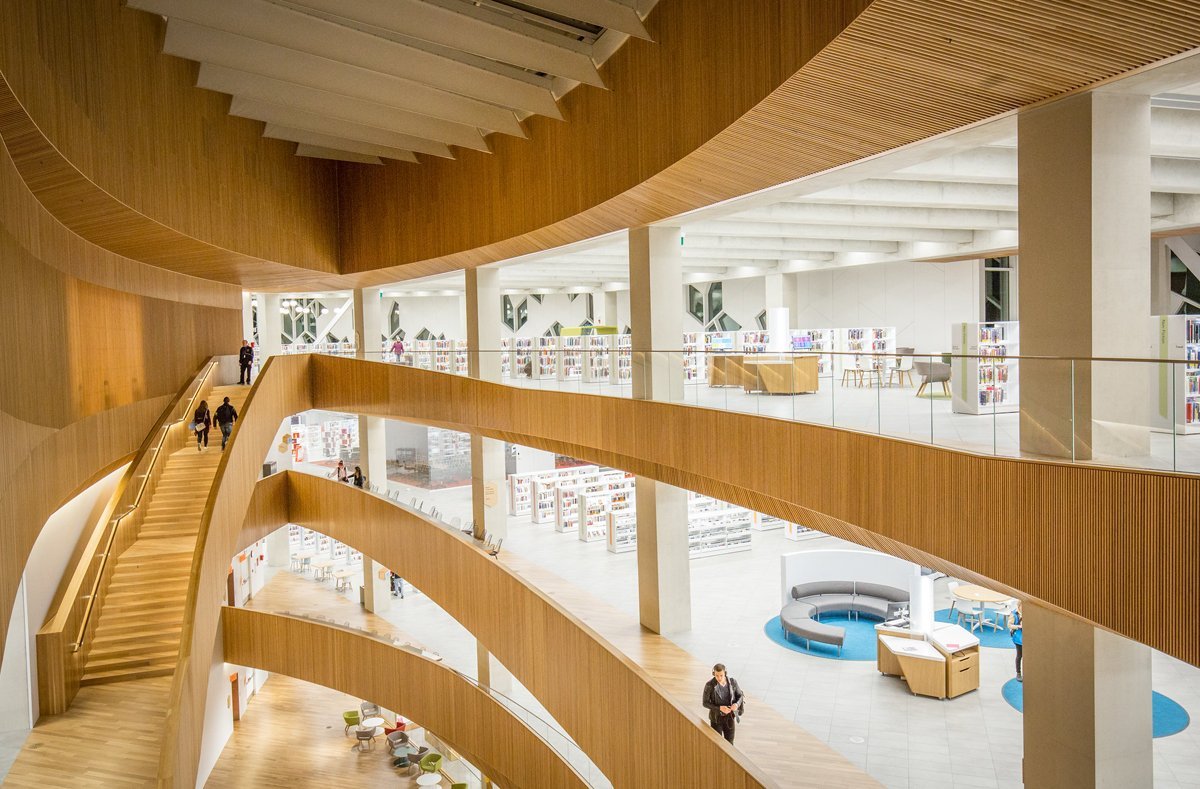 The landscape surrounding and joining into a central plaza and the terracing is reminiscent of the foothills before the Canadian Rocky Mountains. It is free to enter, and well worth exploring the inspiring new space and the surrounding amenities. Make sure to bring your camera! 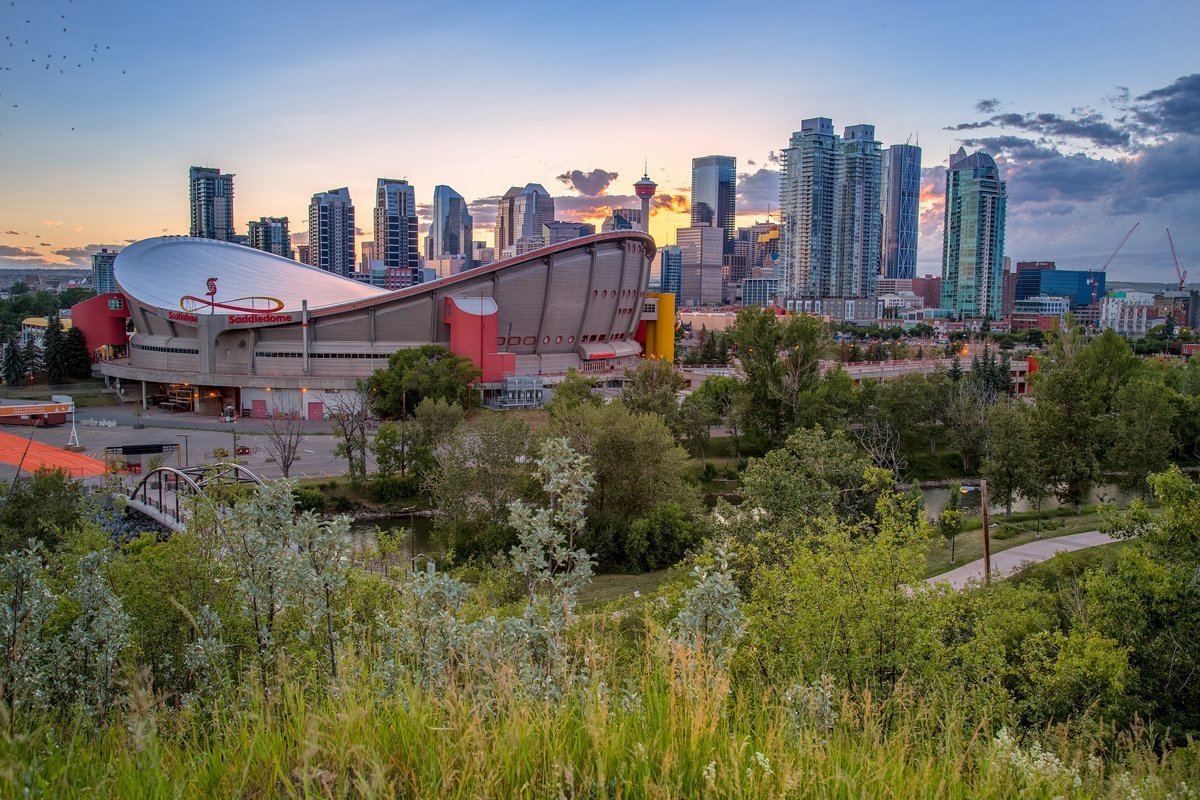 Take a Walk on Crescent Ridge

Take a walk along Crescent Ridge on the north side of downtown for one of the best panoramic views over the city. This is a great spot to enjoy some nice weather and take great photos overlooking downtown Calgary. The view encompasses the Bow River, towering downtown skyscrapers, lush greenery, character homes the Sunnyside neighbourhood below, and the distant foothills and snow peaked Rocky Mountains.

For a nice loop, park at the east-end of Crescent ridge near Centre Street, and walk westward towards 10th Street NW, then walk south into Kensington. Grab a drink on a patio, then walk back along the Memorial Drive’s river-side path. Finish with a heart-pounding climb up the stairs behind the Curling club to get back to your vehicle, or cross into China Town and come back up Centre Street for a longer walk.

A visitor might also want a more guided tour of the city to learn its history, and fortunately, there are plenty of guided walking tours to take you around the iconic landmarks. 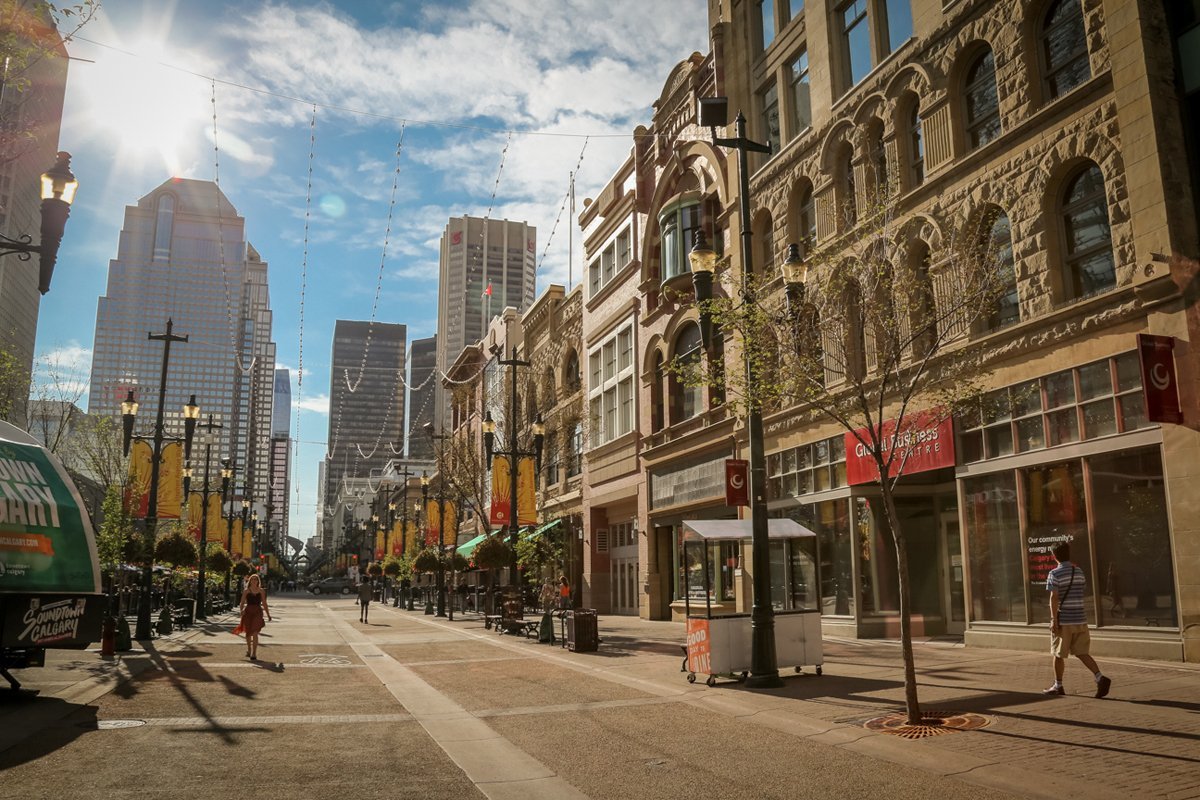 Go Shopping on Stephen Avenue or in Kensington

Stephen Avenue is Calgary’s main downtown, pedestrian area. It’s a great place to walk around, browse in shops, and get a feel for the core of the city. It starts at city hall and stretches toward TD Square, a multi-level downtown shopping mall. Grab lunch or a coffee in one of the many fantastic eateries in the area.

Kensington is a trendy area just outside of downtown, filled with dining, drinking and unique shopping opportunities. If you want to shop but don’t have a lot of money to spend, Kensington has a majority of the city’s consignment and second-hand boutiques. Some of the commercial building still standing the neighbourhood date before the first world war, and the entire district has a ‘small village’ whimsical feeling as you walk down the streets. 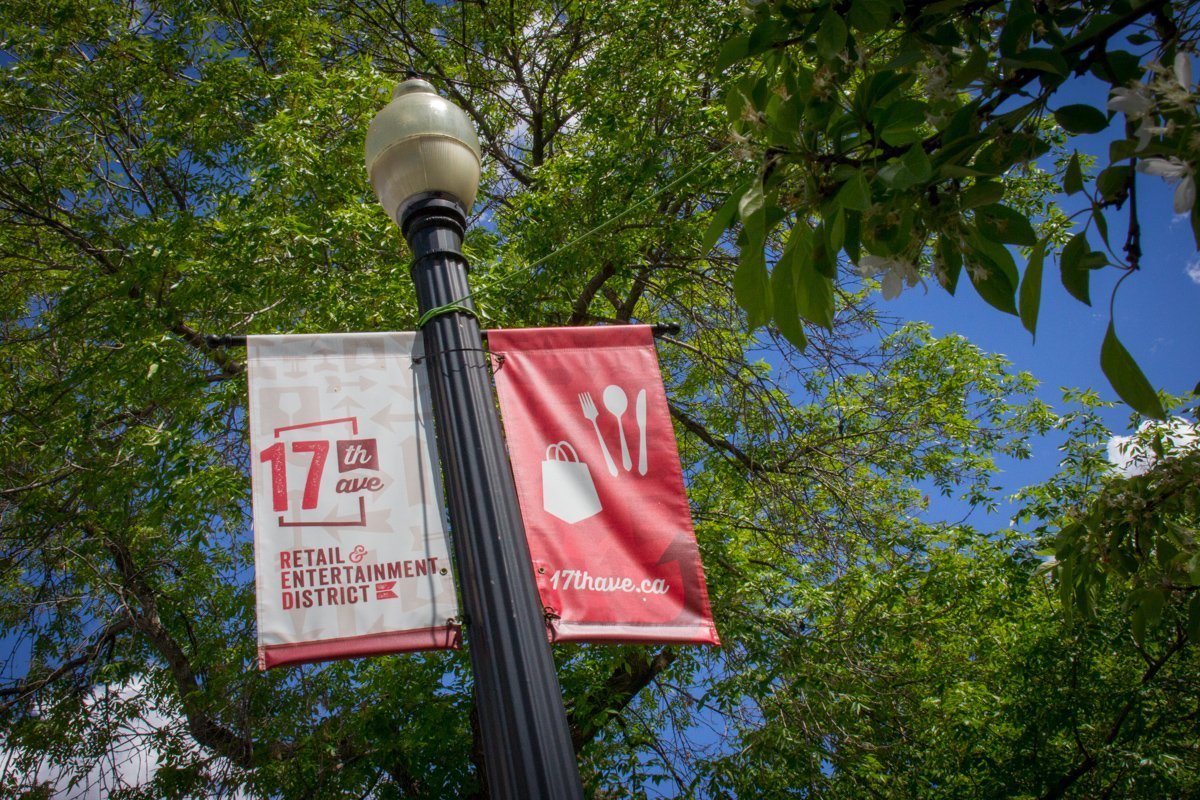 Have Drinks on 17th Avenue

17th Avenue is a major east-west road spanning across the Southwest quadrant of the city, and is another vibrant nightlife area. The street meets the Stampede Grounds at one end, and has a dedicated CTrain station, making it extremely accessible.

Nicknamed the ‘Red Mile’ in 2004 during the Calgary Flames NHL playoff run, it was not uncommon to see over 100,000 fans crowding the streets and bars along 17th ave during game night wearing the team’s red jersey. The street continues to be an unofficial gathering place for sports fans that regularly spill over from the Calgary Stampede or events at the Saddledome.

Walk the length of 17th Avenue and you will find fantastic boutiques, vintage shops, pubs, nightclubs and bars with every possible food trend or restaurant. Day or night, it has something for everyone. A classic haunt with the best summer patio is the Ship & Anchor Pub near the corner of 17th Ave and 5th Street. 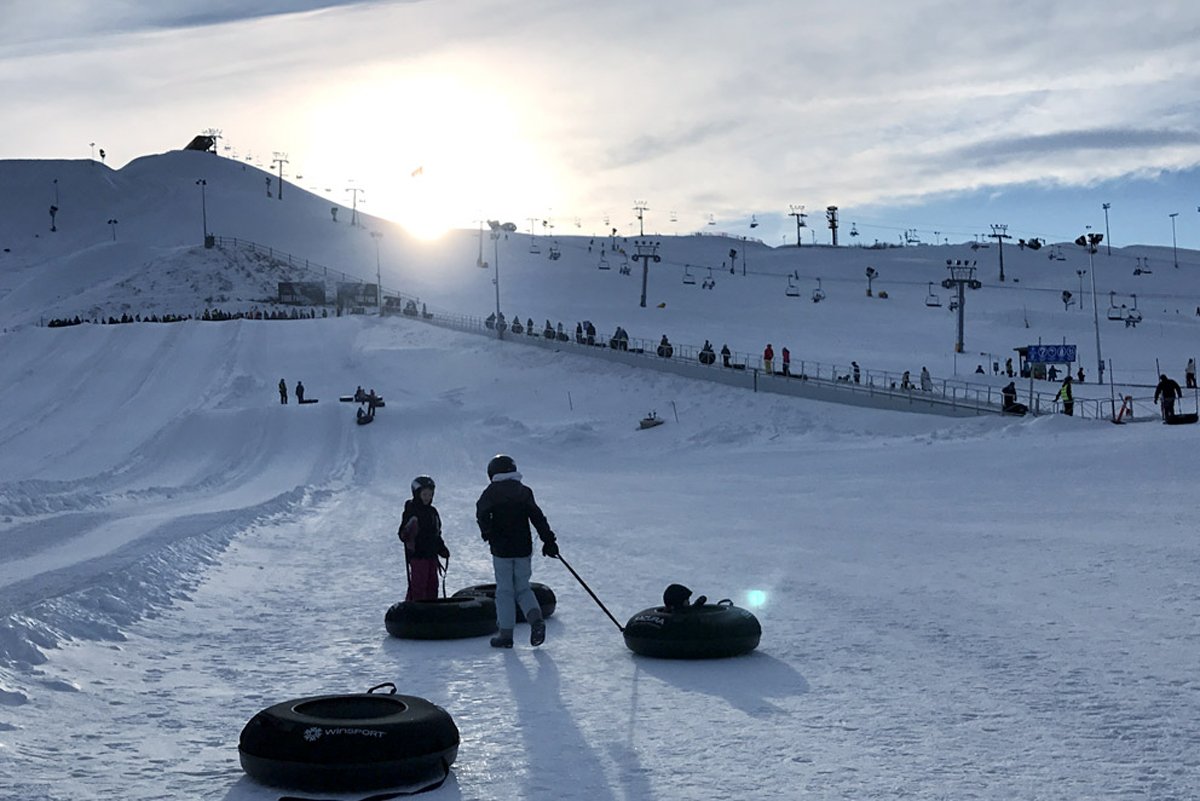 Get Athletic at COP

Canada Olympic Park is the site for Calgary’s 1988 Olympic Games, and still an active sport training and recreation complex. If visiting in the summer or fall, try the zip line – the fastest in North America, or opt for mountain biking, or the freefall bungee jump. If visiting in the winter, you can try bobsledding down the old Olympic track, public skate events or tubing at the Acura tube slide park. Despite the ski hill being a bit on the smaller side, its perfect place to learn or for a quick ski or snowboard day without the drive to the mountains. 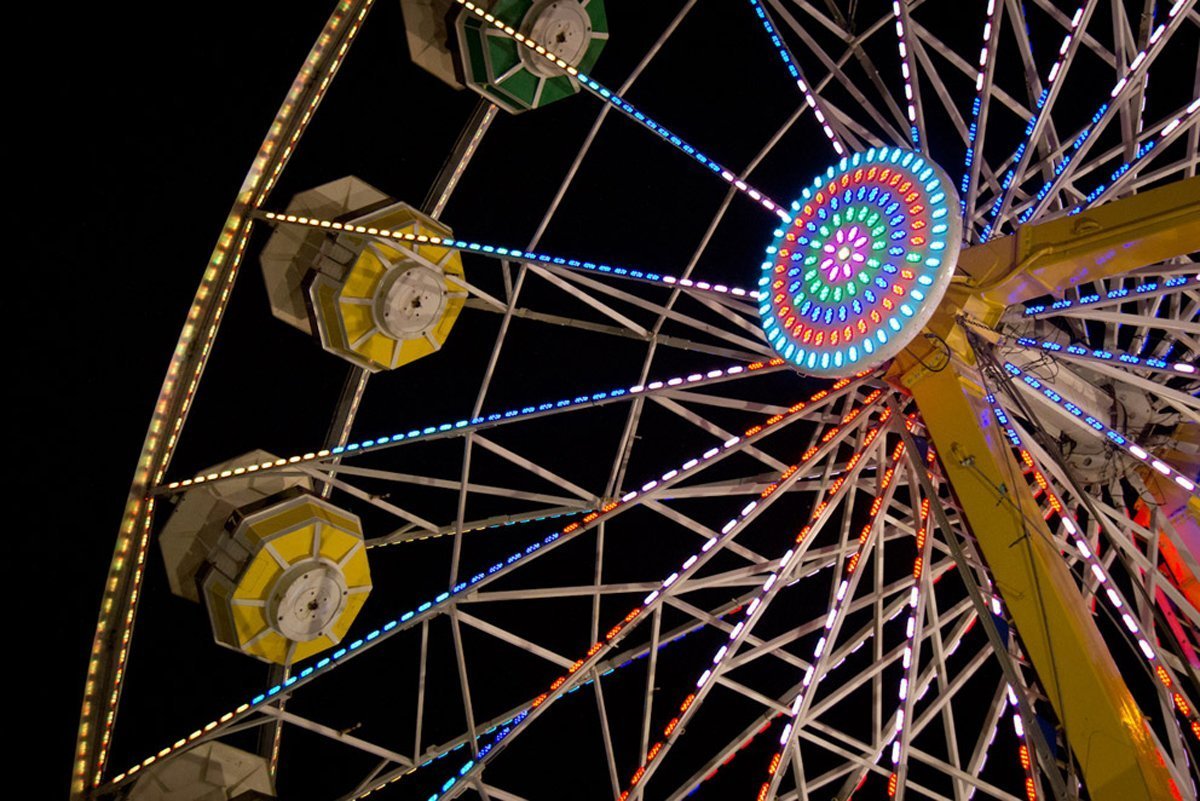 Check out the Calgary Stampede

Much of cities national and international identity is tied to the Calgary Stampede. Nicknamed ‘Stampede City’ or the colloquial nickname, ‘Cowtown’, for 10 days in July, the Calgary Stampede fever is in full force across the entire city. Originally its humble roots stemming from 1886 when the Calgary and Agricultural Society held its first farming fair. Now, it’s a massive rodeo, exhibition, festival and carnival.

Known as the ‘Greatest Outdoor Show on Earth’, it attracts over one million visitors to the city every year. The Stampede features the world’s largest rodeo, a parade, midway rides, stage shows, concerts, agricultural competitions, chuckwagon racing, and First Nations exhibitions. There are massive parties, free pancake breakfasts hosted throughout the city, and something for everyone with the outdoor markets selling everything from artisan crafts to bizarre food concoctions. Nightly fireworks also light up the whole city.

The main event takes place in downtown Calgary at Stampede Park, which has two dedicated CTrain stops for easing the influx of people. So, grab your cowboy hat and boots, and get ready for a party like nowhere else on Earth. 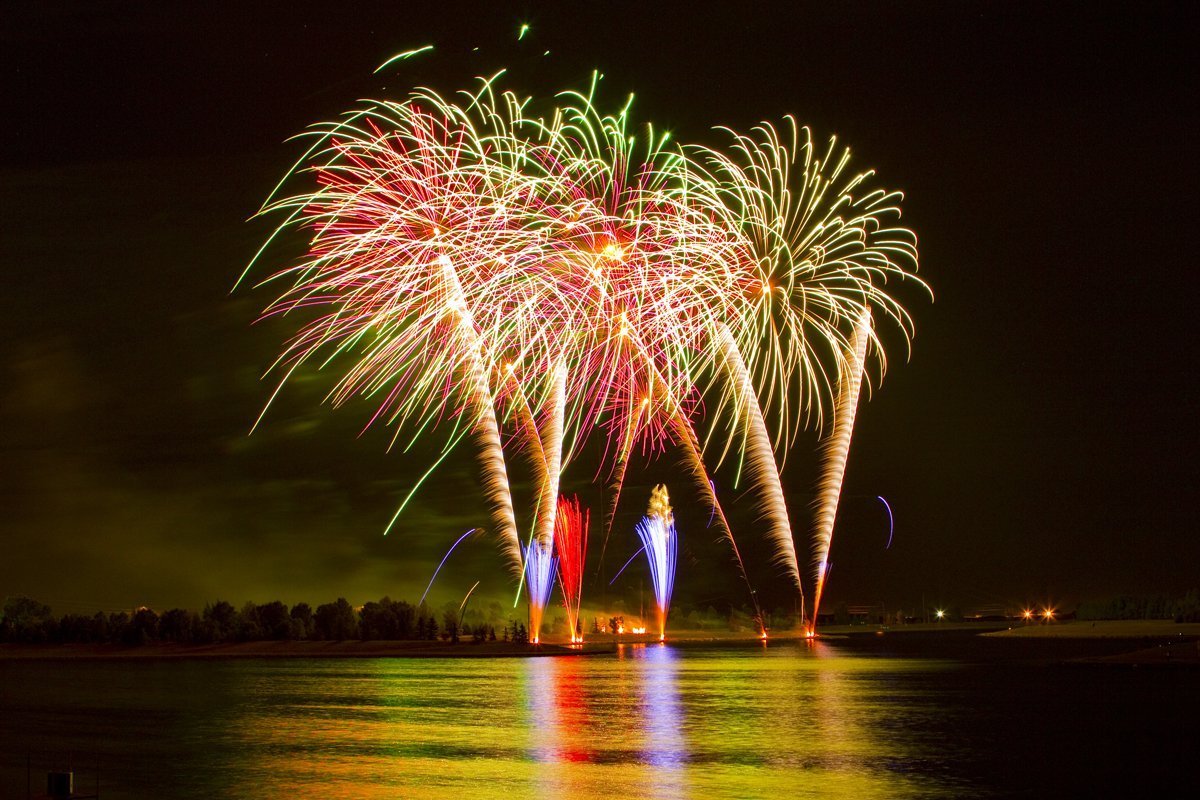 Another summertime favourite event in Calgary is watching the GlobalFest fireworks contest. The event takes place at Elliston Lake, the second largest lake in Calgary (after the Glenmore Reservoir) in the Southeast quadrant, and is a cultural celebration.

Each night a different country completes for the best fireworks display over the lake, which the OneWorld Festival held in Elliston park features cultural pavilions, food kiosks, live music concerts, and night markets. It’s an awe-inspiring event that the whole family can enjoy. Note that parking is limited at the event, but it’s possible to take a shuttle from a nearby shopping mall. 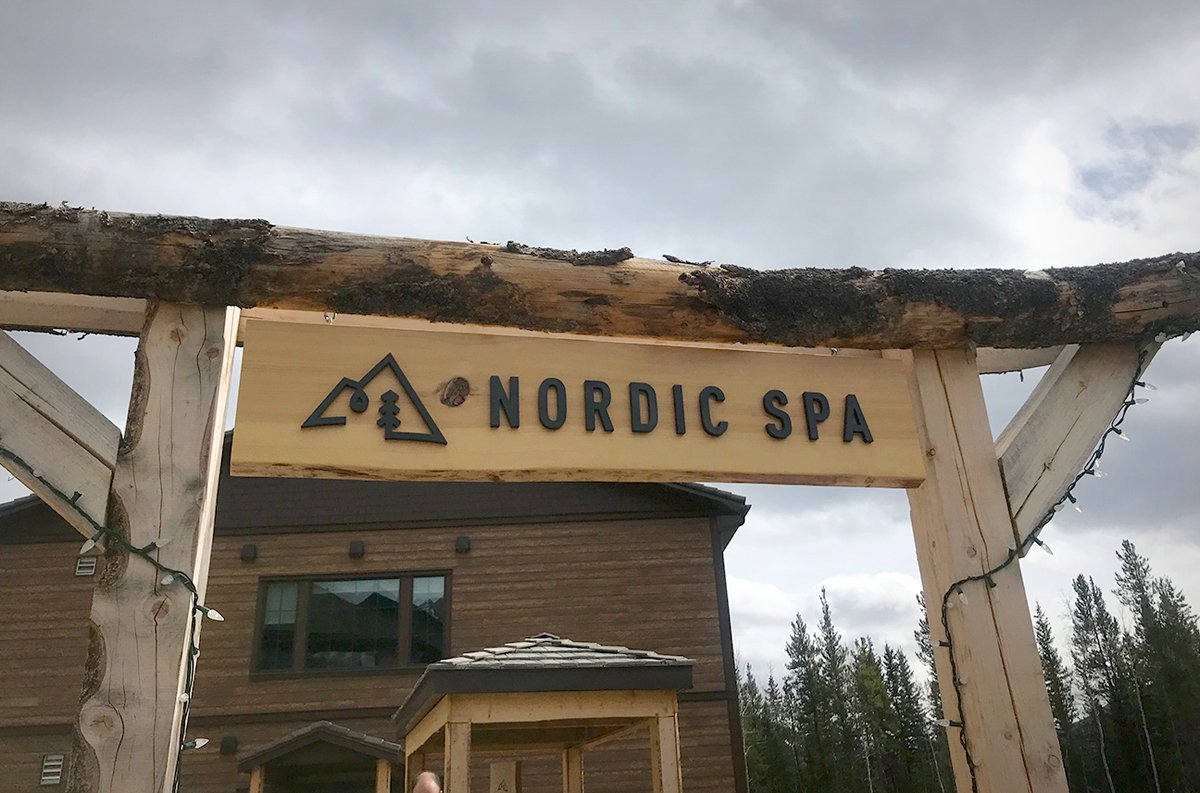 Relax in the Kananaskis Nordic Spa

Take a day trip out of the city to the new and incredible, Kananaskis Nordic Spa. This outdoor spa features pools of different temperatures, steam rooms, saunas, open-air fire pits and an indoor lounge area. You can pay for services like massage, or just pay for pool access. It is a beautiful facility and as relaxing as possible. Bundle up in some plaid robes, sit around an open-air fire and free the stress melt away. Perfection.

Getting Here and Getting around:

Calgary’s (YYC) international airport is one of the largest and busiest in Alberta, with major flights coming in and out all over the world. There is a shuttle bus into downtown, taxi, car rentals and car2go car share available on site. The airport sits next to a major north-south highway road, Deerfoot Trail, making it easy to get anywhere inside the city quickly.

Getting around is also easy via the bus network or the light rail, above ground CTrain system. With 44 stops spreading around the city it can be useful to avoid major city traffic and explore the sights for a reasonable price. It is also useful to know, the CTrain system is free to ride inside the downtown core.

Like any major city, Calgary has hundreds of hotels at a range of prices. From the opulent Fairmont Palliser Hotel, contained in a historic stone building downtown, or the luxurious Hyatt Regency Hotel, filled with amenities, and a ballroom. For the more budget-savvy travellers, there is a massive list of standard hotels, rooms available for short term rentals, and the always reliable Calgary HI Hostel to rest your weary bones. 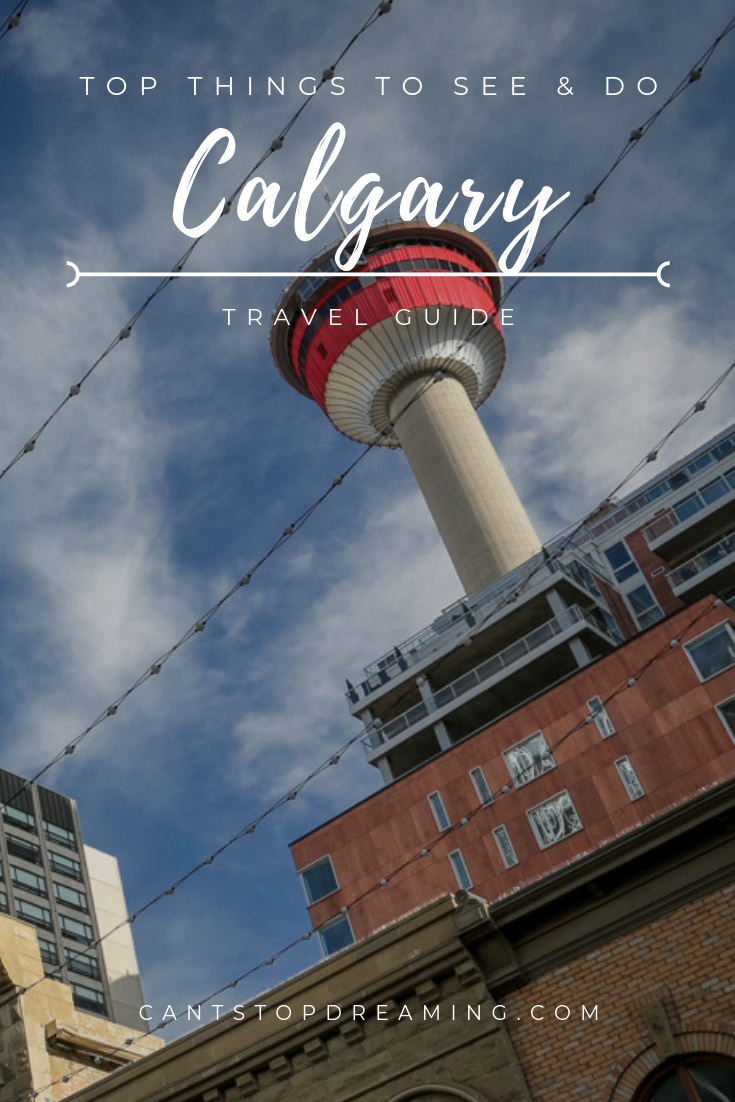