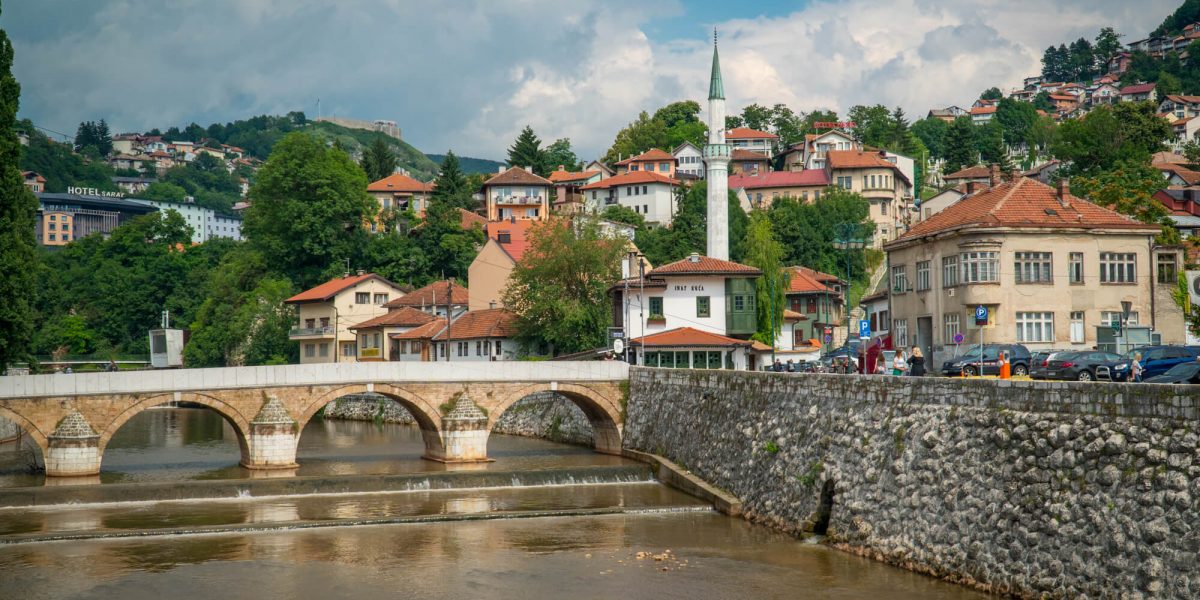 Sarajevo is the infamous capital of Bosnia Herzegovina, a European capital with a turbulent past. The city was the starting point of the First World War with the assassination of Archduke Franz Ferdinand of Austria. Then in the 1990’s, Sarajevo became the epicentre of the world’s worst siege, which has left lasting scars on the infrastructure and the people. Despite the painful past, Sarajevo is recovering and looking forward to the future as one of Europe’s most fascinating and underrated places to travel to.

Nestled in a beautiful mountain valley, this small city has historic sights, a vibrant nightlife, great food, striking architecture and a reasonable price point. Sarajevo is incredible, and must-see destination for anyone visiting the Balkans. The Bosnian capital is one of the most diverse, historically and culturally rich places I have ever been, blending European and Ottoman influences, unlike anywhere else in Europe. Sarajevo’s skyline weaves towering minarets and spires, with dozens of Mosques, Cathedrals, Orthodox Churches and Synagogues scattered throughout the city. It is truly a collision of east-meets-west, with a fascinating culture and some of the loveliest people I have met in all my travels.

Don’t visit the Balkans region without taking the detour to spend a few days in Sarajevo. Although it’s a bit of a challenge to get to, deep in the heart of the Bosnian mountains, it’s well worth the journey. An even better option is to extend your journey from Sarajevo through the stunning mountainous landscapes of Bosnia Herzegovina, one of my favourite countries in all of Europe. I have put together the following Sarajevo itinerary to help you make the most of your time in this amazing city.

Here are the Must-See Places on your Sarajevo trip: 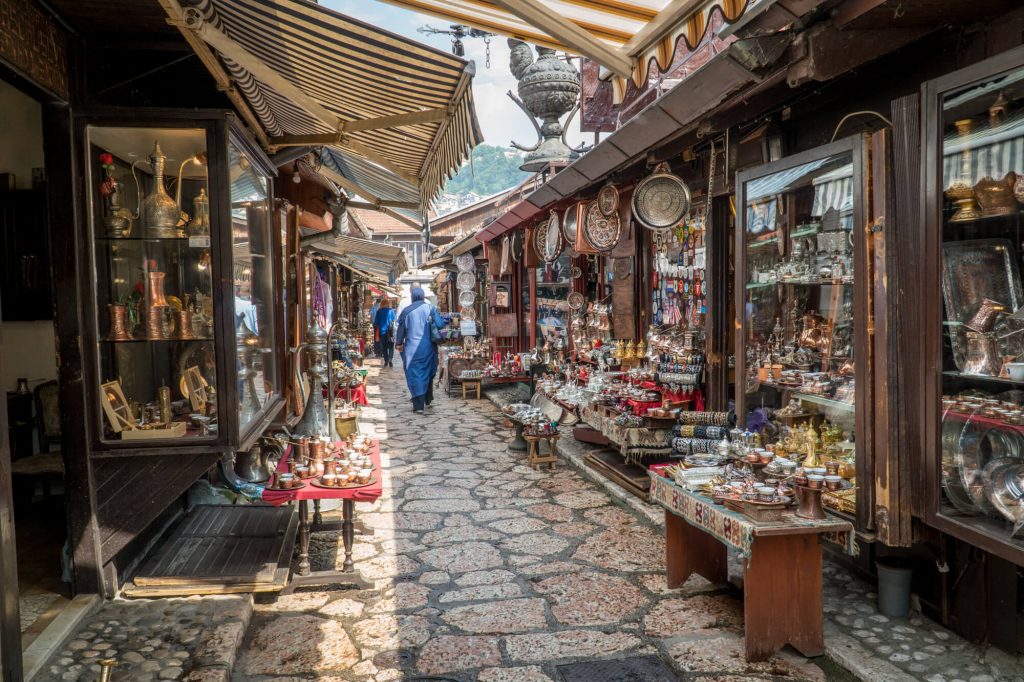 The cultural heart of Sarajevo is in the Ottoman Quarter, a Turkish settled area which dates back to the 15th century. The winding cobbled-stone lanes are filled with cafes, hookah bars, artisan shops and several important historic buildings. The Ottoman Quarter has the cities best shopping, with hammered tin and copper goods, beautiful Turkish style lamps and woven carpets. It is also the central hub for Sarajevo’s best dining and nightlife, hidden within passageways and unassuming doorways thoughout the quarter. This area has a completely different vibe from anywhere else in Europe and well worth exploring. Have a tea, learn about the history of Sarajevo, grab a hookah and pick up some great souvenirs. 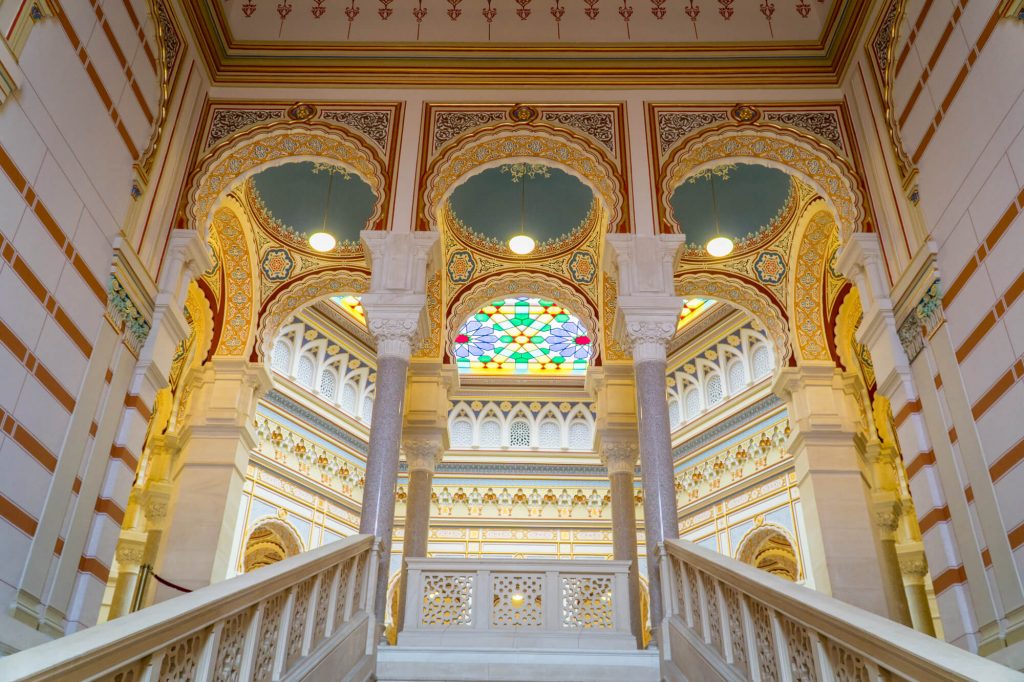 It took eighteen years of restoration work for the Vijećnica, the library that was destroyed during the Bosnian War, to reopen to the public. The Moorish style building was inspired by two historic mosques in Cairo, Egypt, and is well worth a visit if you find yourself in Sarajevo. The admission fee allows you to explore the war-time photo exhibitions inside, and the city museum in the basement. Come to ogle at the amazing architecture and stay learn more about the cities turbulent past.

Sarajevo underwent the longest siege in history, for three and a half years they were under constant attack during the collapse of Yugoslavia. Take the Total Seige Tour to learn about what life was like during war times, and visit various important sites, such as the Tunnel of Hope, Trebevic Mountain and the Jewish Cemetery.

Although various companies offer similar tours, we opted to go with Sarajevo Funky Tours. The Seige tour was fascinating and heart-breaking, taking our small group past key spots during the war.  I can’t say enough about how great the guides were. It was interesting to hear their perspectives on the war and gain a deeper understanding of the tragedy that Sarajevo (and the Balkans) faced, just 20 years ago. Very highly recommended. 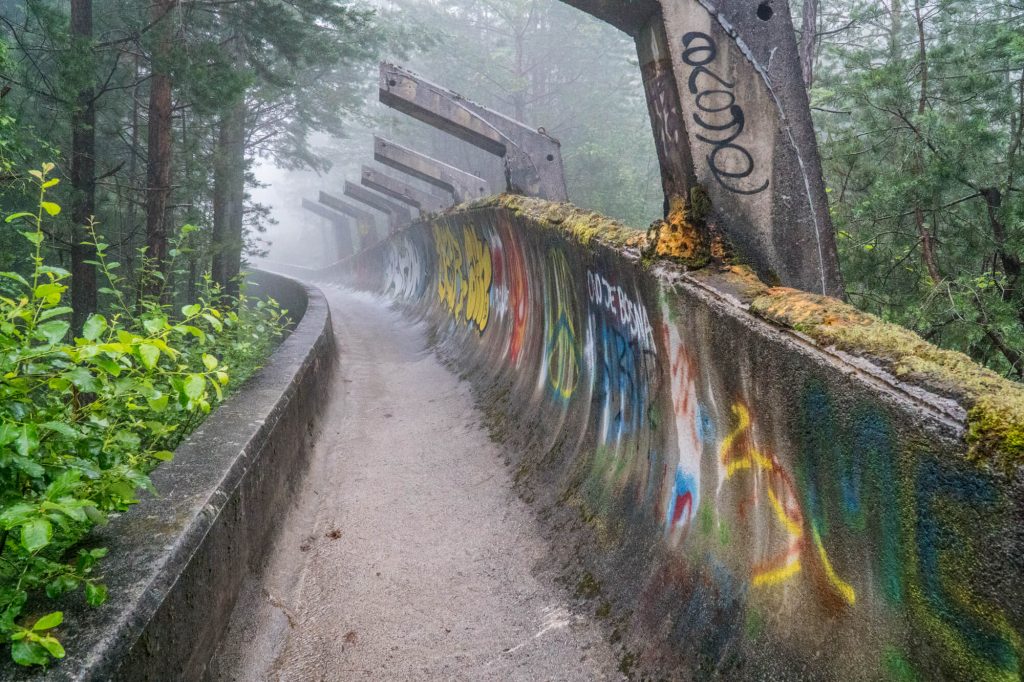 The 1984 Winter Olympic Games held in Sarajevo were a time of hope and happiness for Bosnia, just 8 years before the start of the devastating Yugoslavian war. The various Olympic sites were damaged and abandoned after the war, and have since become a haunting memory of the glory days.

Visit the abandoned bobsled track and walk the length of the graffiti-covered remains of the track, surrounded by overgrown forest that is slowly swallowing the track. It’s possible to visit several Olympic sites as it’s own complete tour, but we were able to visit the bobsled tracks as part of the Total Siege Tour mentioned l above. 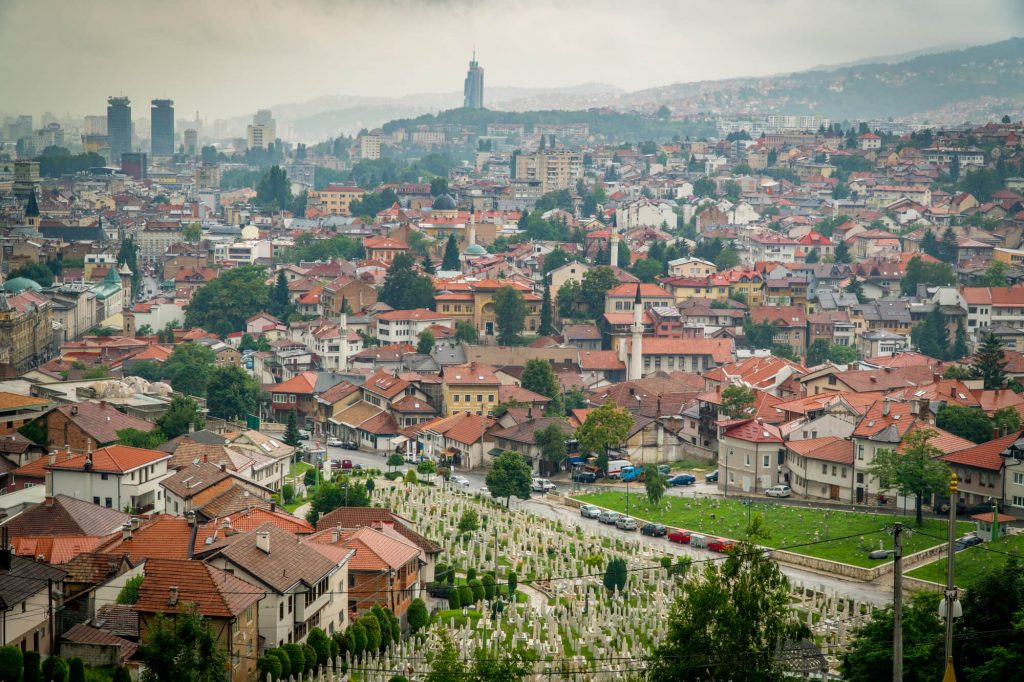 Take in the View Over Sarajevo

Sarajevo is nestled between lush mountains with multiple viewpoints that you can hike, drive or take a gondola ride up to. If you just want a sampler, walk up under the gondola to one of several restaurants overlooking the city and enjoy a meal or glass of wine and admire the pretty view.

From the Sarajevo, it’s also easy to reach the Yellow Fortress which is perched high above the city and has a spectacular view, or to Trebevic Mountain, which played a tragic role in the siege of Sarajevo during the war. In an attempt to repair the wounds of the city, the old ski gondola up Trebevic Mountain has been recently restored and is now operational. Take it to the top for a view over the city without the climb. 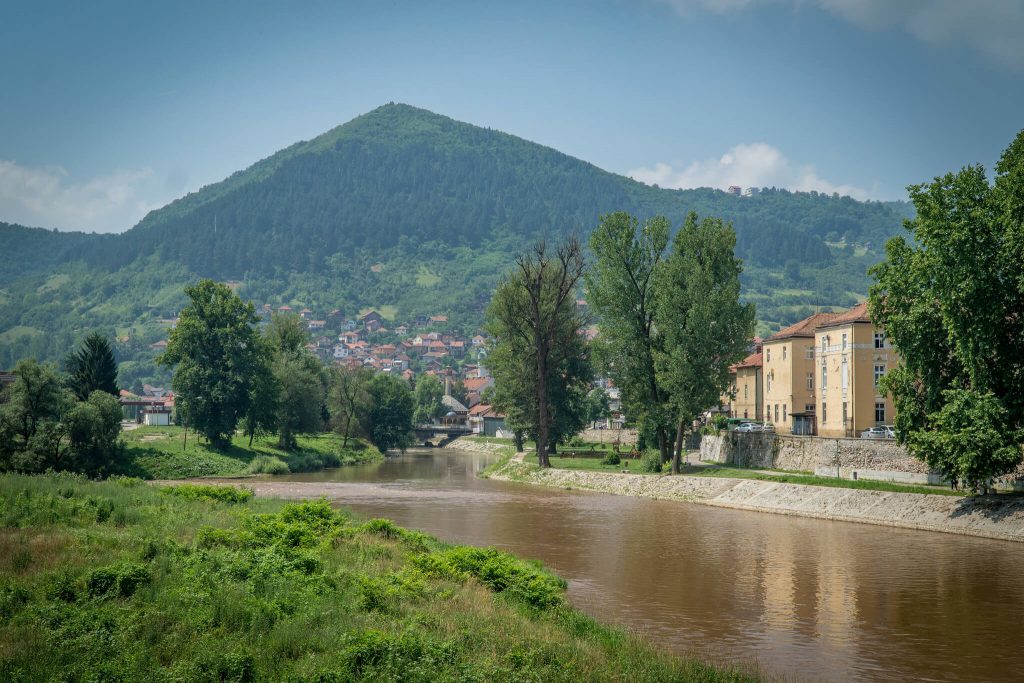 Take a Day Trip to the Great Bosnian Pyramid!

Real ancient archaeological site or crazy hoax? You can decide for yourself on a day trip to the town of Visoko to see the great Bosnian Pyramid. Just 15 miles northwest of Sarajevo is the small Bosnian town with a big claim to fame – home of the world’s largest, and oldest pyramid. As we discovered, however, there are multiple pyramids within the complex and plenty to explore on a day trip.

More about the Great Bosnia Pyramid

Come see for yourself by catching a bus from the Sarajevo bus station to Visoko. When you arrive, walk across the bridge into the city center and along the main street where you will find a few tourism offices, to get some information and a map. Take a taxi to the archaeological site office, or take a very long walk to the main Pyramid entrance, where you will find several small food stands a tiny museum, some artisan vendors, and a whole lot of energy seeking hippies.

It’s possible to go on a basic tour underneath the pyramid, to see the lengthy caverns that have been simply carved underneath the pyramid. It definitely isn’t Egypt level but its fun to wager whether it’s real or a hoax while taking in the energy of the caves or the pretty day use area and hiking paths surrounding it. Make sure to pack a lunch and spend time in the gorgeous natural area.

After exploring, take another taxi (or the long walk) toward the Pyramid of the Moon, the top of the road that climbs to Pyramid of the Moon, the largest pyramid on the cluster. The largest structure is grass-covered, and looks remarkably like a hill, but has an insanely beautiful 360-degree view over the countryside and scattered villages make it worth the journey. It’s possible to take an easy day tour of the Pyramids from Sarajevo as well.

Sarajevo is an amazing city, and Bosnia-Herzegovina is a fantastic off-the-beaten-path country to visit on your next European adventure. It is the epicentre of so much world history and I hope that travellers will look beyond the stigma and tattered past, and begin to see the country as the amazing hidden gem that it is. Happy travels!

Sarajevo has an airport, with some connections to other Balkan capitals. There are also buses and shuttles from neighbouring countries, although options are limited. There is also train service between Sarajevo and Mostar. Use the following website to plan your journey to Sarajevo:

For inexpensive accommodation in Sarajevo, I recommend the Franz Ferdinand Hostel. It’s a nice, centrally located hostel with private and shared rooms. 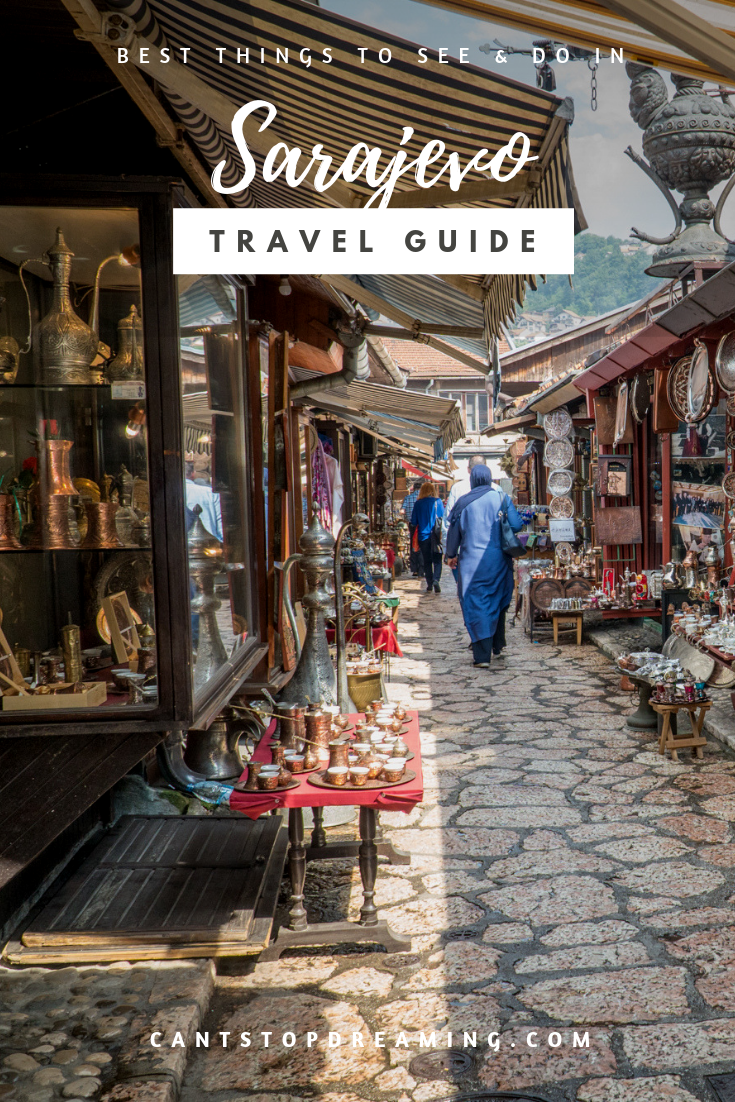