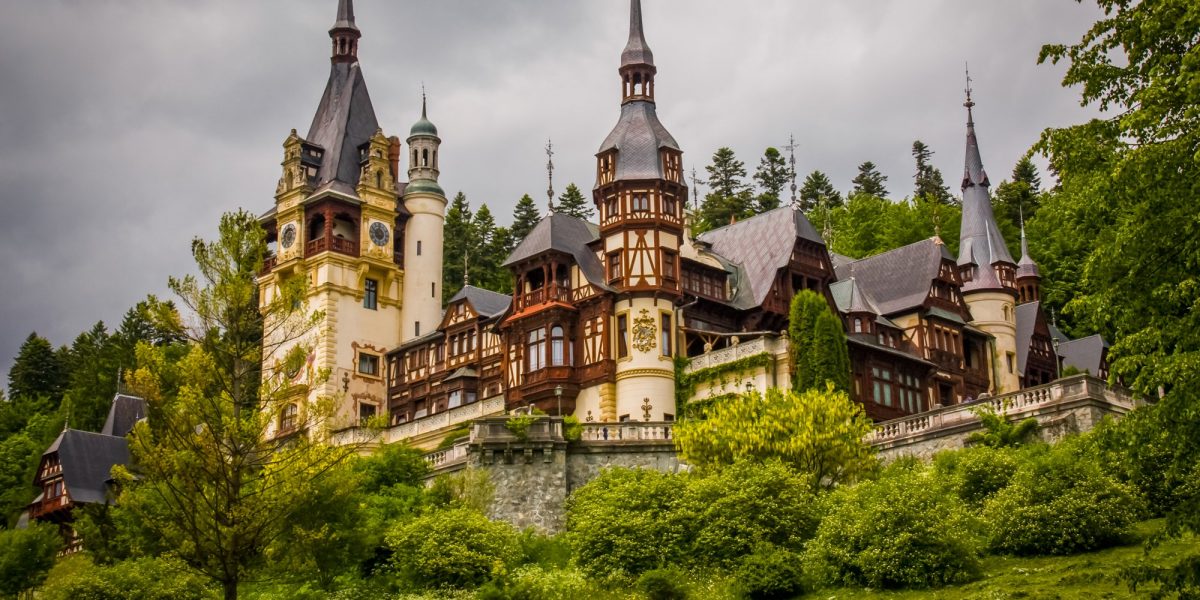 Most North Americans have an impression of Transylvania – dark, eerie, horse-drawn carriages and vampire legends – but that is so off base it’s unbelievable. We toured through the very heart of Transylvania between Sinia, Brașov, Sighişoara and Sibiu and rarely found anything related to vampire legend, besides a couple of cheesy tourist T-shirts and cheap coffee mugs. Even the “Dracula Castle” aka Bran Castle has nothing to do with the ‘real Dracula’, Vlad Tepes. The area was however absolutely stunning and blissfully relaxed. Tourism hasn’t destroyed the charm of the area, and you can spend days driving between the charming towns and exploring their historic centres. Many of the towns are very old, with Saxon roots and steeped in history. It was one of my favourite parts of Europe and I highly recommend a visit.

I travelled with my family to the area, and since we had a large group, it was considerably easier to hire a driver with a van to take us from place to place. There are bus and train travel between some of the main stops, but this really is a good stop to rent a vehicle as some of the best spots would be more challenging to get to by transit. Here is my experience road-tripping through Transylvania. 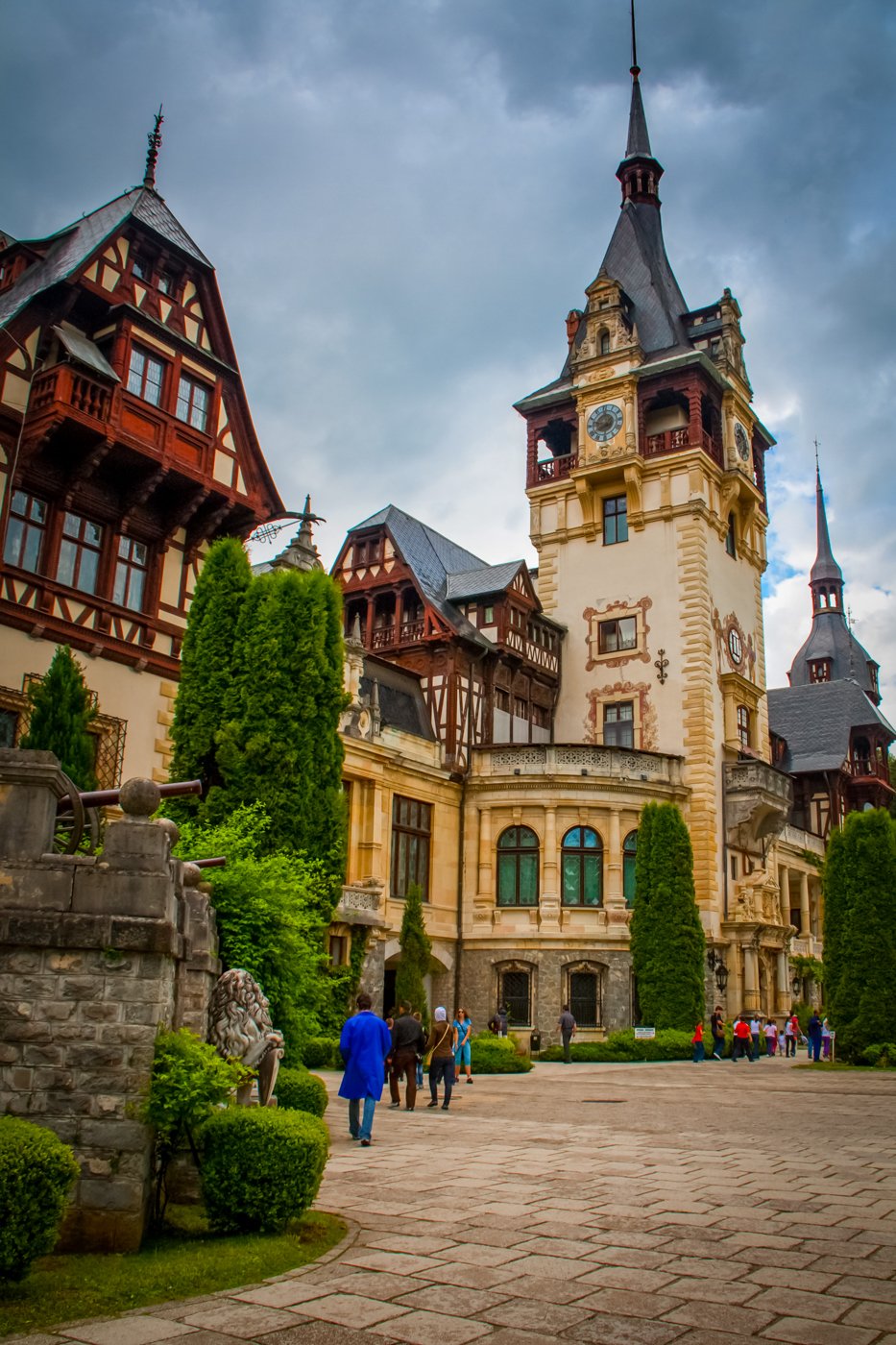 We left Bucharest early, and head toward the Transylvanian mountains.  The start of Transylvania is only about 2.5 hours from Bucharest so we were able to make a quick stop in beautiful Sinia before arriving at our base for the night, Brasov.

Sinia is most famous for the amazing Neo-Renaissance Peleş Castle, which is one of the most fairytale places I have ever been to. Built between 1873 and 1914, the castle is located in an incredibly scenic area surrounded by fields of wildflowers and views of the Carpathian Mountains in the distance. The inside is unbelievably ornate with beautiful wood carvings and each room is themed with a different decor style -Moorish, Florentine, Turkish and French (to name a few).

The castle also has an armoury which holds over 4000 pieces of medieval armour or mostly oriental origin. Of the 168 rooms in the castle, only 35 are accessible to the public but it is definitely worthwhile to see the sheer grandeur of the place. I would definitely recommend paying the photography fee (30 lei) which they are rather strict about and castle lovers may want to take the extended tour. Peleş Castle was a wonderful sight and a great introduction to Transylvania.

Brașov is one of the most touristed areas of Transylvania and the seventh most populated cities in Romania. The city is surrounded by the Carpathian Mountains, and there are are many great ski resorts and outdoor activities here. The city has beautiful surroundings, lively cafe culture, medieval walls and Gothic-style churches, but it’s probably most famous for Bran Castle (aka Dracula’s Castle).

Although author Bram Stoker never actually visited Romania, his Dracula character was depicted to live in a Transylvanian castle perched high in a valley, overlooking a river, similar to Bran Castle. As well, Vlad Tepes (Vlad the Impaler) a prince in the 1400s, also nicknamed Vlad Dracul, was a blood-thirsty ruthless lord, frequently thought to inspire the character. He had connections to the castle, though documentation is unclear. Either way, when in Transylvania, a visit to the famous Dracula’s Castle is a must. 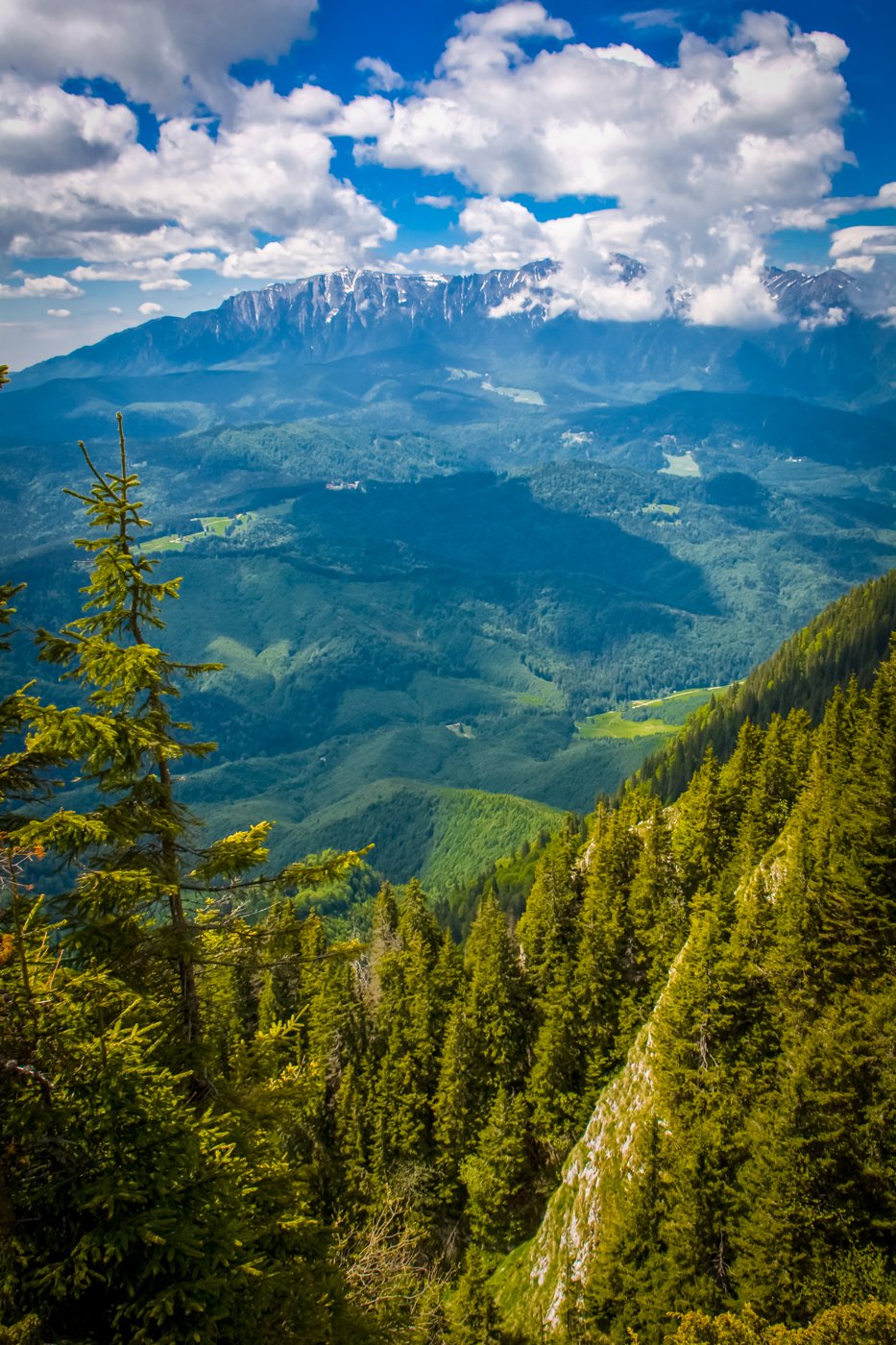 Having stayed the night in Brașov, we decided to take an early morning cable car to the top of Mount Tâmpa for some incredible views over the Carpathian Mountains. The highest point is about 960 m, and most of the area is a nature reserve with numerous walking paths and beautiful views over the surrounding area and tiny nearby villages. It was a great spot to get a breath of fresh air, take photos and stretch the legs before a quick cafe stop in town and heading off to the next Transylvanian stop – Sighişoara.

Sighişoara is a beautiful 12th Century Saxon town with a walled historic centre, which is a UNESCO World Heritage Site. It is one of Eastern Europes few habited, fortified towns, and a beautiful place to explore and photograph. It is a popular tourist spot and the birthplace of the famous Vlad Tepes (Vlad Dracul). This is one of the only spots in Transylvania where we found ANY Dracula merchandise, and it was sparse at that. It is possible to see Vlad Tepes birth home, and it is advertised as ‘Casa Dracula‘ with a few vendors nearly selling vampire t-shirts and cheap coffee mugs. That was it though, no Dracula amusement parks or photo-booths like I expected there to be. Thankfully.

Sighişoara was well worth spending a little more time in. It was by far my favorite town in Romania, with its walled city centre, and pretty colorful buildings. It’s an absolutely stunning place with lots of quaint cafes and cobblestone lanes to explore. It’s not large but has enough landmarks to slowly explore, and a lovely relaxed vibe that makes you want to slow down a little. 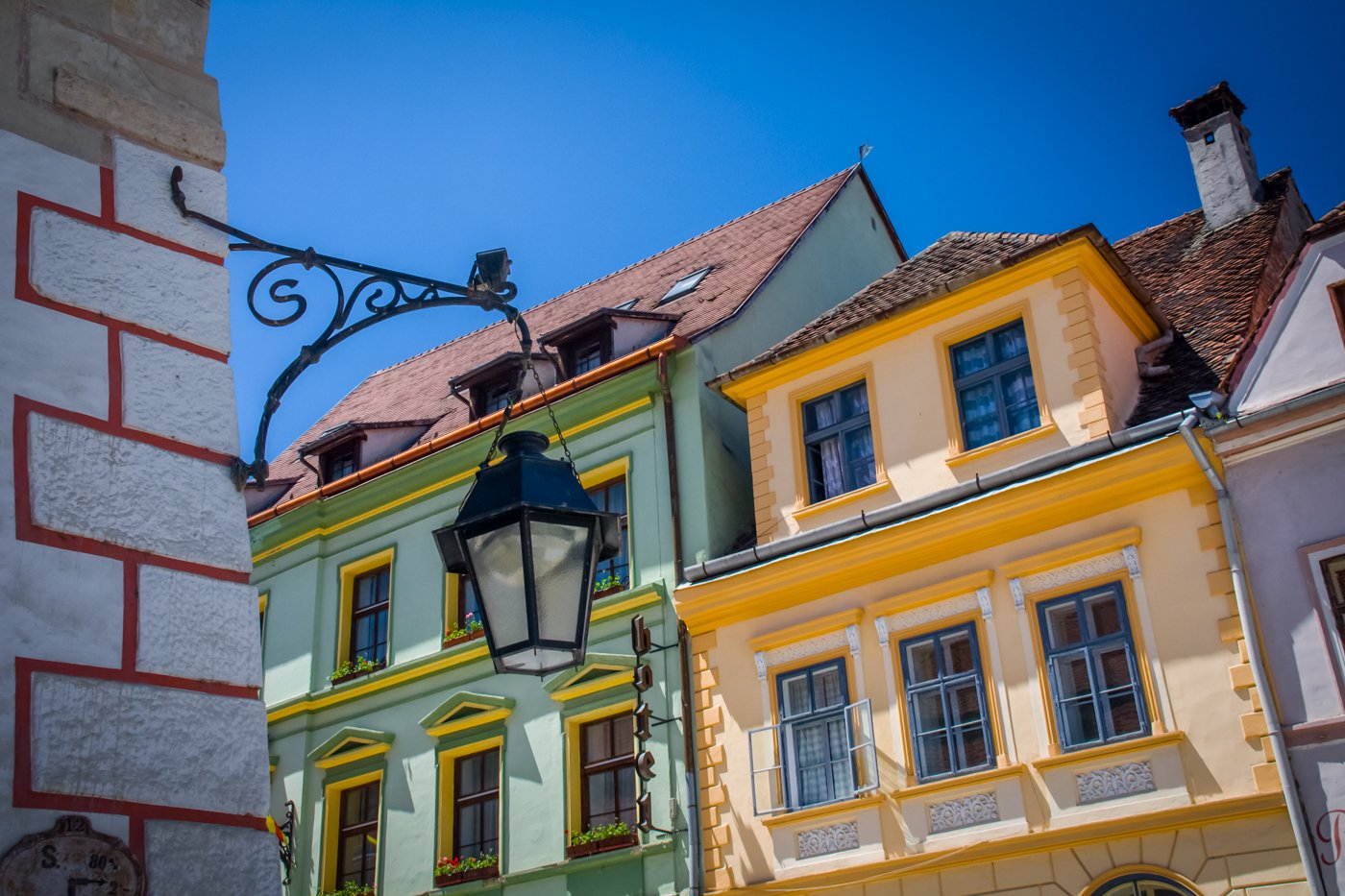 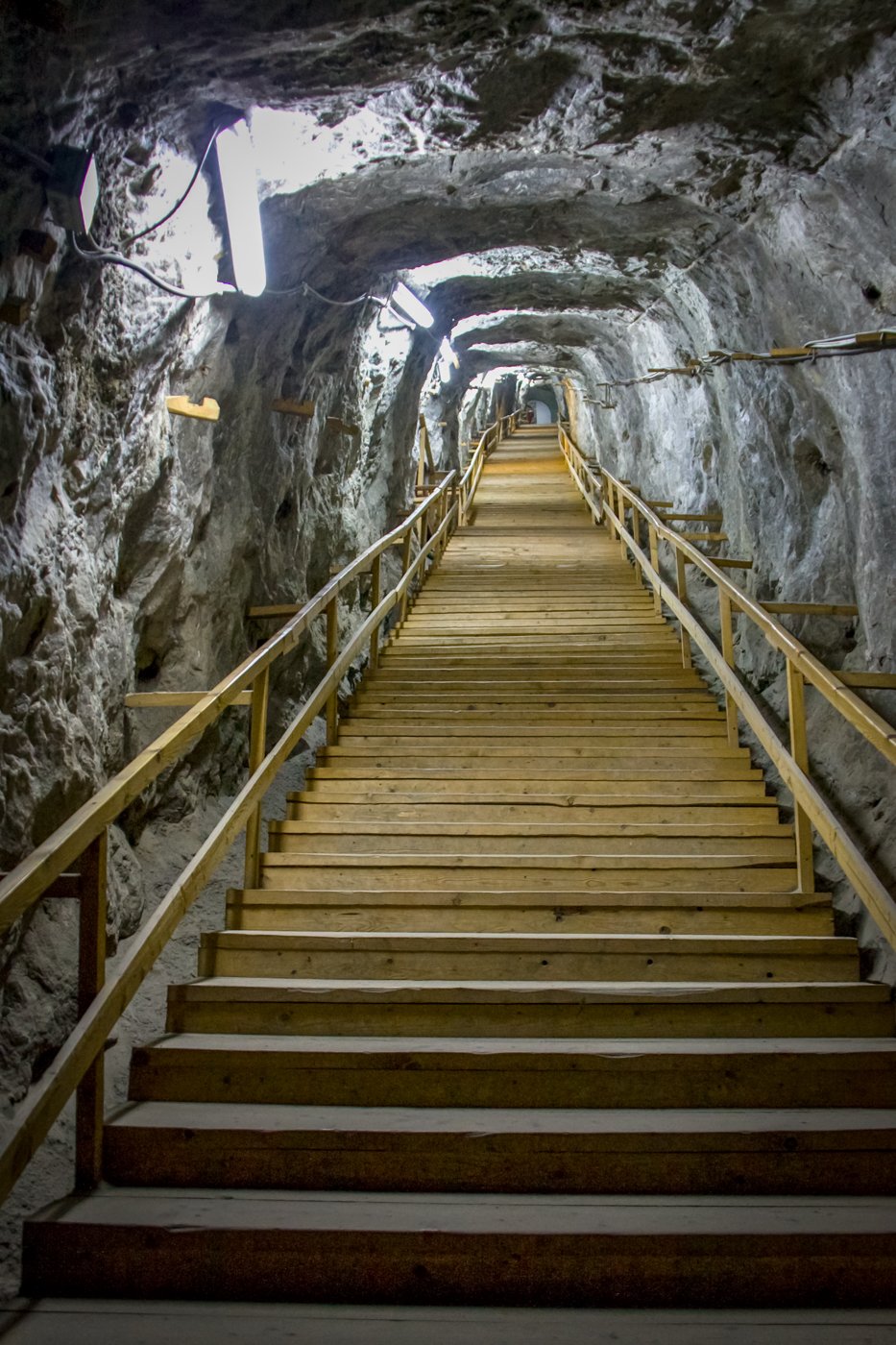 Leaving Sighişoara, it’s possible to take a bit of a detour to one of Romania’s famed Salt mines, to explore the underground world. Salina Praid is one of the largest salt mines in Romania and is rumoured to contain over 3 billion tones of salt. Salt mining here dates back to Dacian times and are massive. Over the years they have become a tourist hot-spot and have grown to include an adventure park, a church, a self-service restaurant with snacks and coffee, internet and even a winery! It was a very cool spot to explore, but too dark for many photos.

Sibiu was our next stop for the evening and another beautiful Saxon city with a lively historic centre. It was the largest and wealthiest of the walled citadels built in the 12th century by German settlers and has absolutely gorgeous architecture. It was named the European Capital Of Culture in 2007 and has a bustling arts scene and many popular museums. It was a great place to relax and do some light shopping. We had been on the road pretty consistently so needed a bit of a break, and Sibiu was a great spot to enjoy some nice meals and relax without a lot of other tourists. 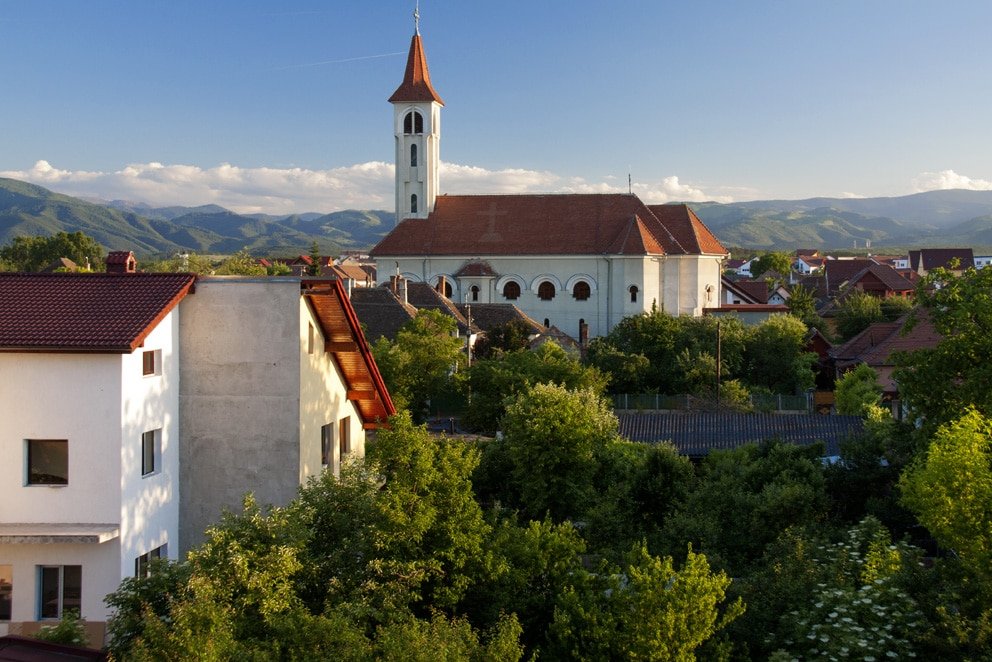 We spent about a week travelling between some of the major Transylvanian cities and I found it to be one of the prettiest and most enjoyable areas in Europe. Despite the initial shock to how little they play on the Dracula theme, Transylvania was blissfully uncommercialized. The forests are dense and lush, the castles and medieval town centres are beautiful and the people are very kind. It’s a definite clash of the old and new, with just a little mystery mixed in. I absolutely loved it. 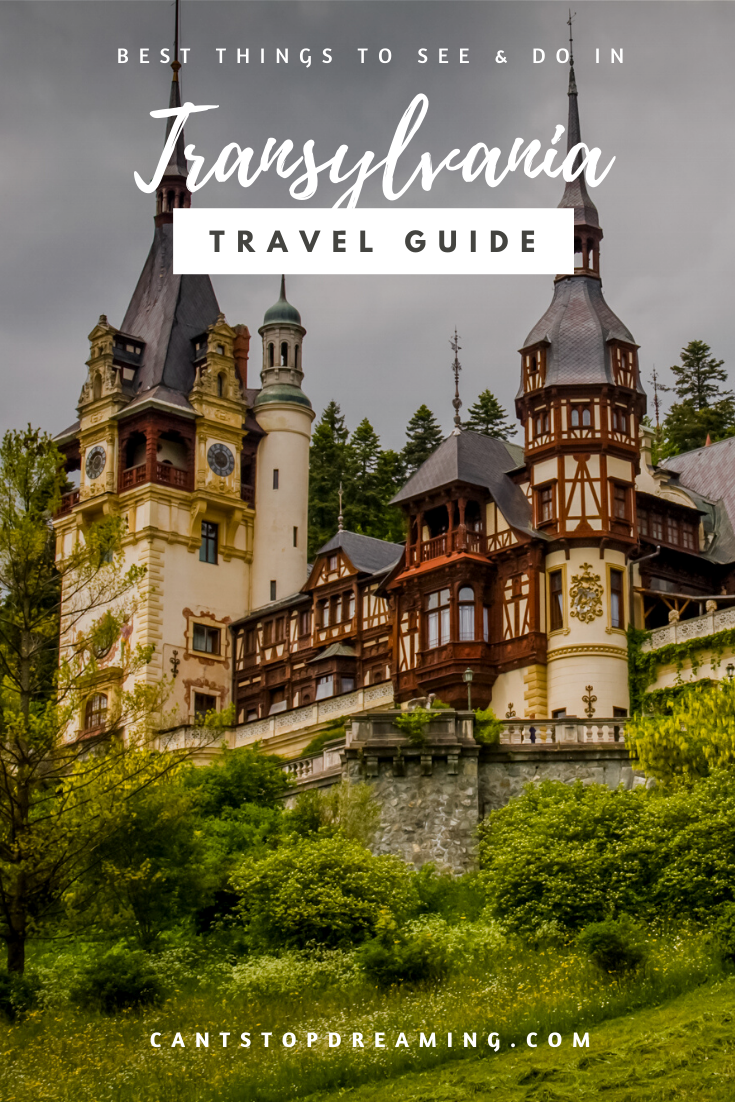