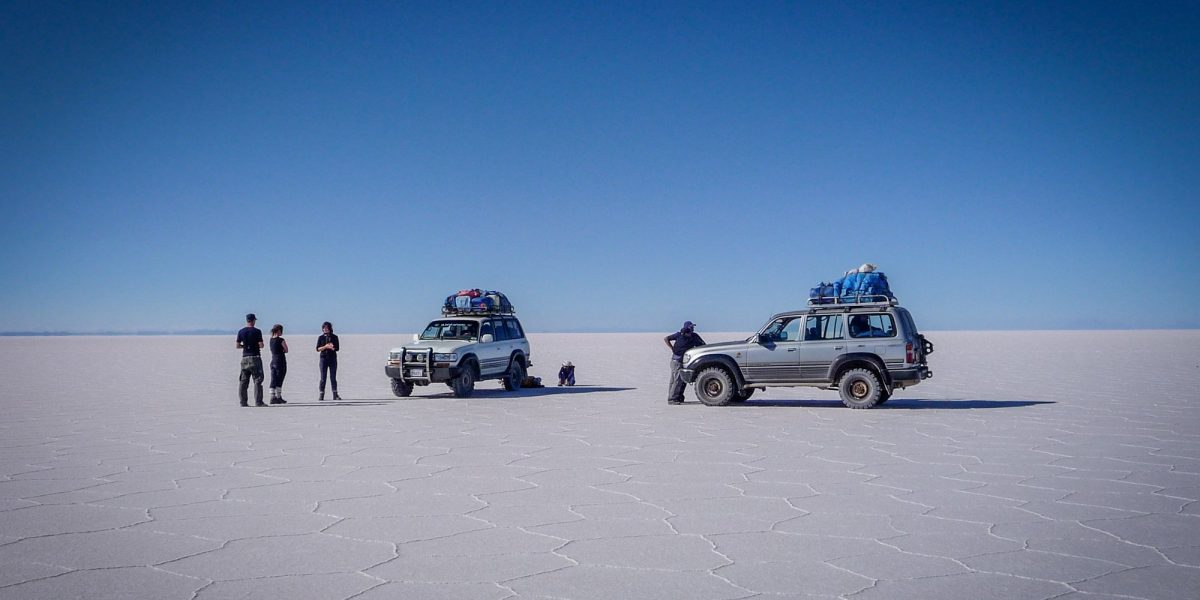 We arrived in the ‘wild west’ town of Tupiza in southern Bolivia, after crossing the border from Argentina, and immediately signed up for a 4-day tour of the surreal Uyuni Salt Flats. For most people, this is the main highlight of their trip to Bolivia. We used the operator “Tupiza Tours” which was located just off the main strip in the base of a hotel. We would be heading northbound from Tupiza, looping through the highlands closet to the Chile border, and ending in Uyuni, a somewhat different route than the typical Uyuni loop that most tourists do.

The tour was easy to book only 2 days in advance from our hotel in Tupiza and cost only about $100 US each which included all transport, meals and accommodation. We went over the arrangements with the tour company the day before and set off to gather a few personal supplies, leaving very early the next morning for our adventure. 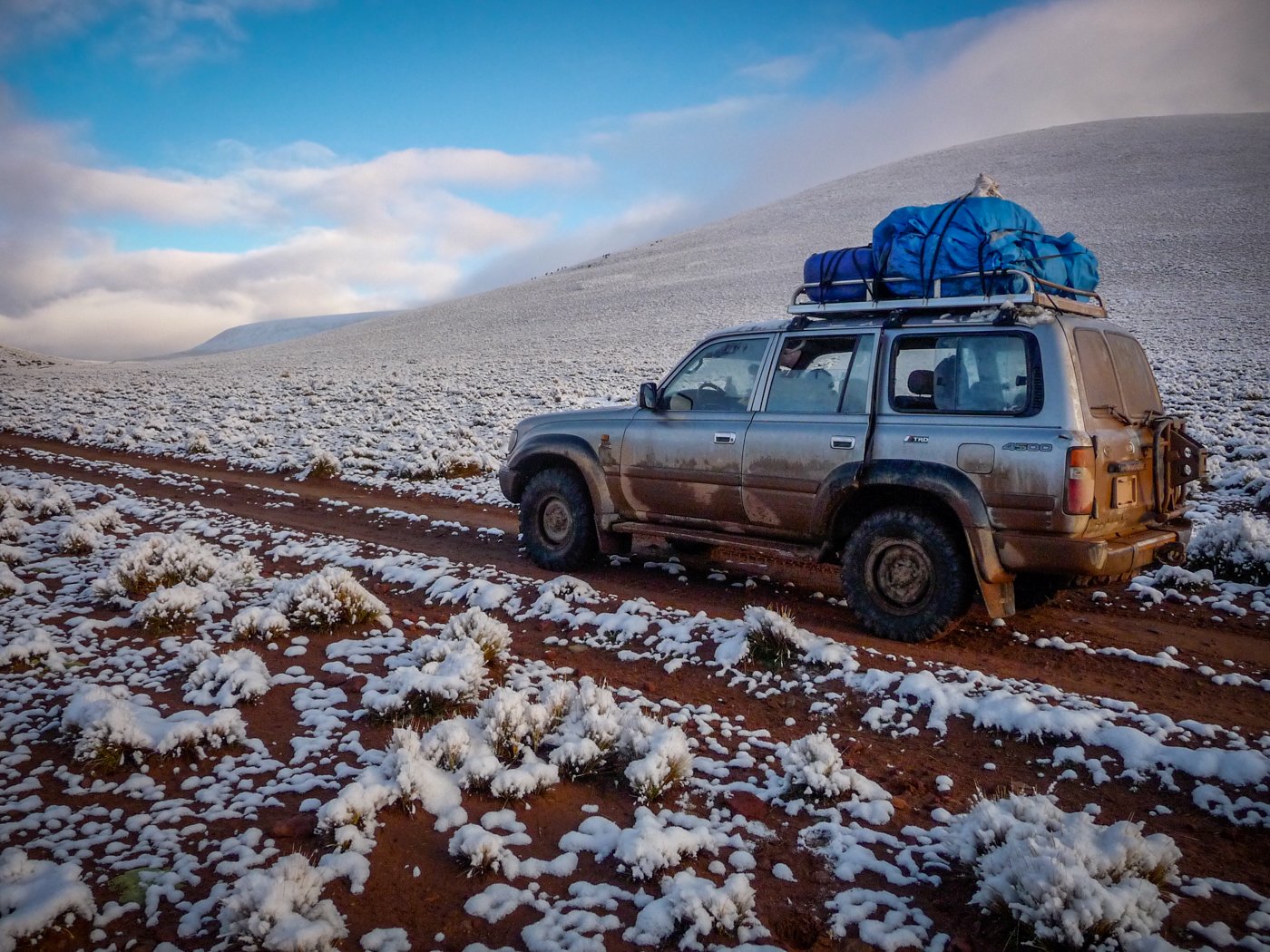 We set off bright and early into the desolate Bolivia countryside in an aged 4×4 truck. There were 7 of us total, the driver and his wife (the cook), 3 Aussie girls, my travel partner Tami and myself. We drove high into the Altiplano and watched the landscape fall away into jagged canyons and strange rock formation, stopping briefly for a roadside snack and to take few photos. The scenery was breathtaking and hours passed by staring out the window as we drove on. The driver passed around some coca for us to chew as we gained altitude and we visited a few tiny villages on route. 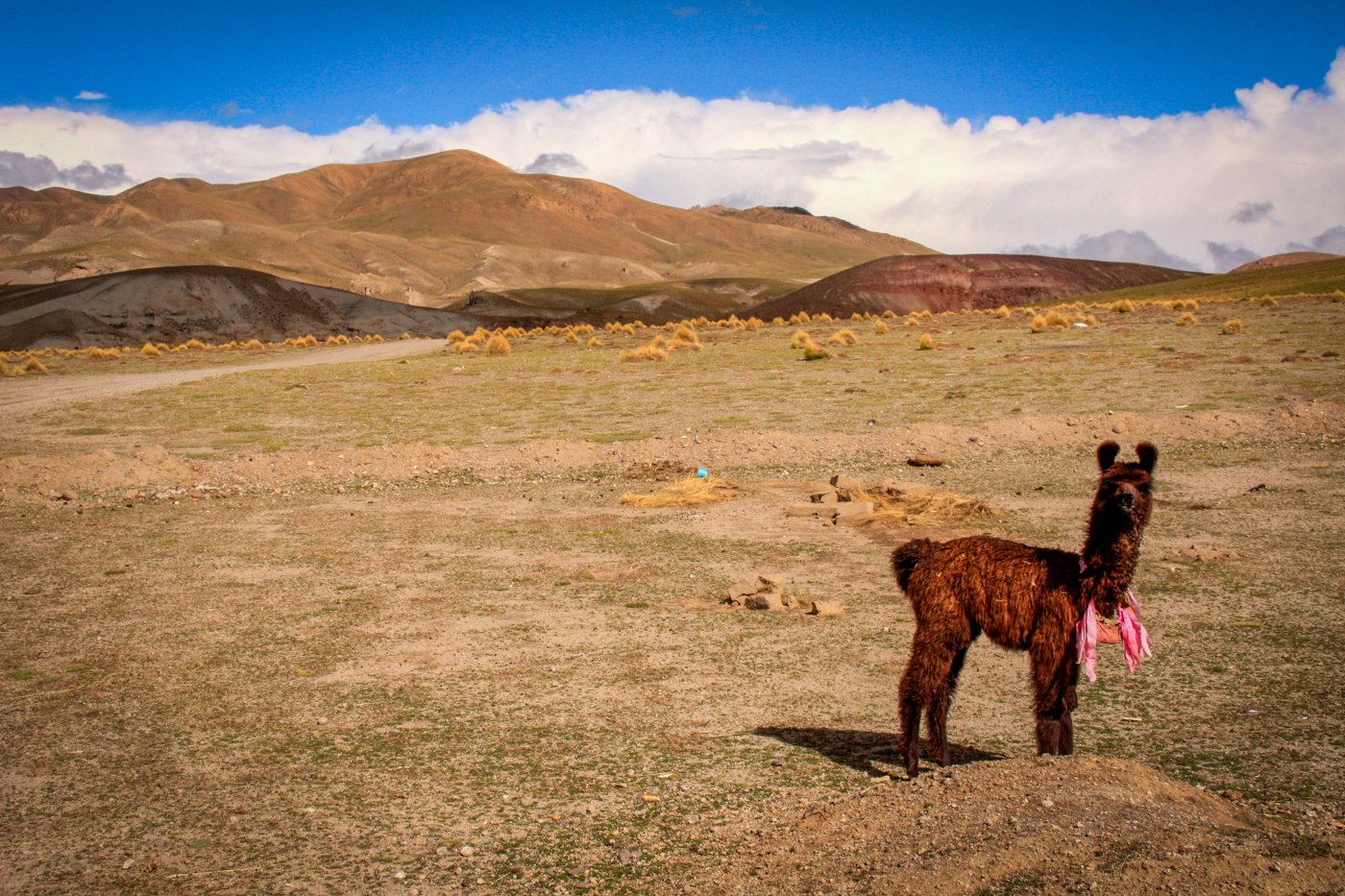 We finally arrived at our accommodation for the night, which could hardly be described as even a village, but more a cluster of mud-brick buildings in the middle of an open field. Our room had 4 single beds also made from mud-brick with a thin mattress and many old blankets. The complex had no heat, no running water, and a generator running a single light bulb in the common ‘dining’ area – definitely roughing it. After a few card games and a couple cups of coca tea, we set off in the chilly darkness to bed.

The next morning was an early 5am rise with coca tea and biscuits for breakfast before we loaded the gear back onto our 4×4 and set off to explore the high altitude volcanoes and lagoons of the highlands. It was a bit of a rough morning as despite taking altitude medicine most of us were feeling a bit ill. It was also the only day of the whole stay in South America when we saw a few flakes of snow and the air was chilly. The pastel-coloured landscape looked incredible in the morning frost, making for some incredible photography.

We stopped at a few lagoons in a series of different coloured ones we visited. A particular highlight was the Laguna Verde which was a large crystal clear, turquoise green lagoon at the base of the Licanbur volcano. This area marks the border between Bolivia, Chile, and Argentina. There were hundreds of llamas wandering about and many of the lagoons had pink flamingos feeding in them. 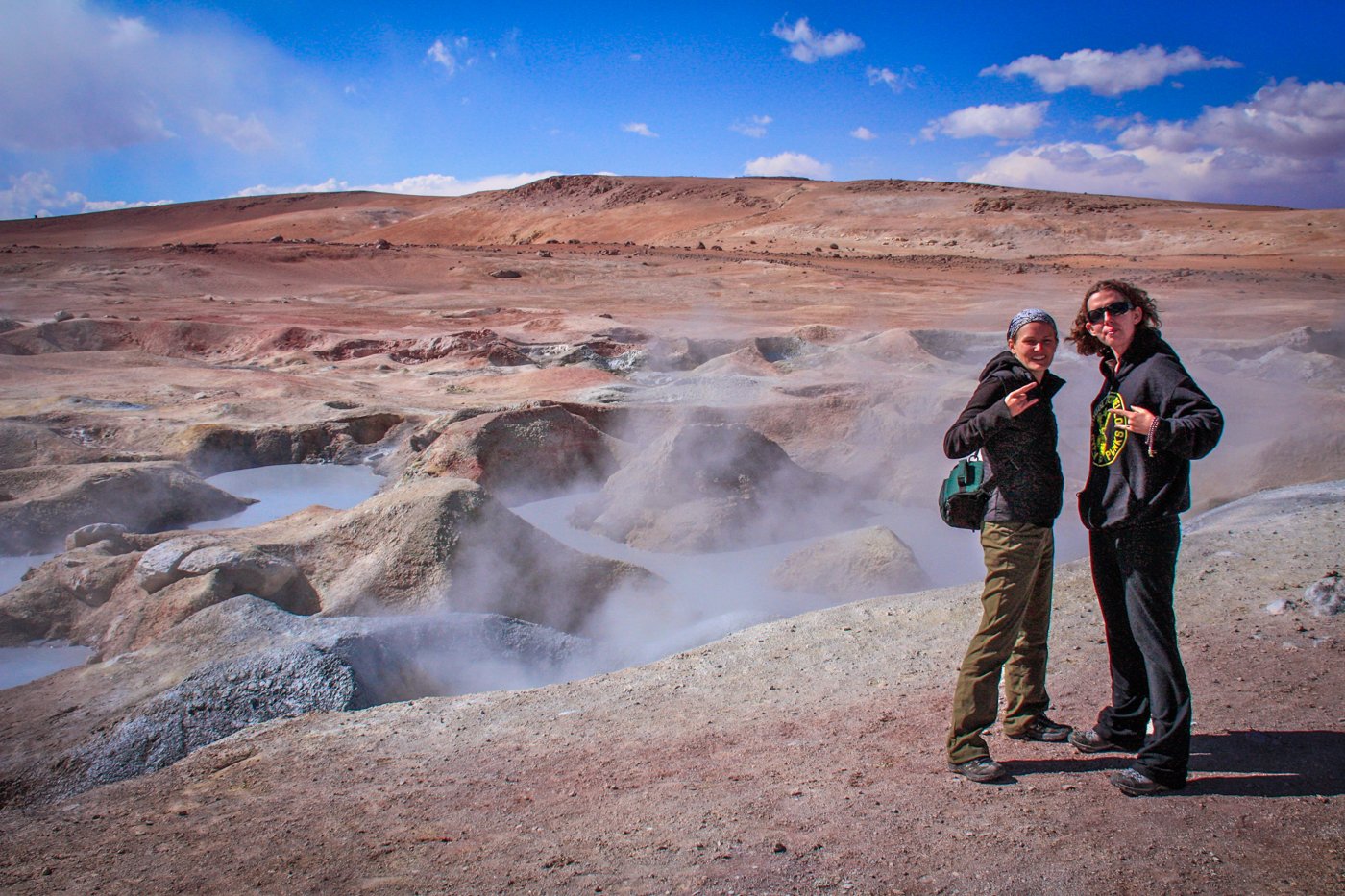 We stopped at the Termas de Polques hot springs, but I didn’t feel well enough to go in. By that point, the altitude made it hard to walk only a few meters without becoming short of breath. We made a final stop at some geysers which were at the highest altitude of the entire journey – about 5000m. They consisted of boiling mud pots and steaming vents, it smelled dreadful but was amazing to see. 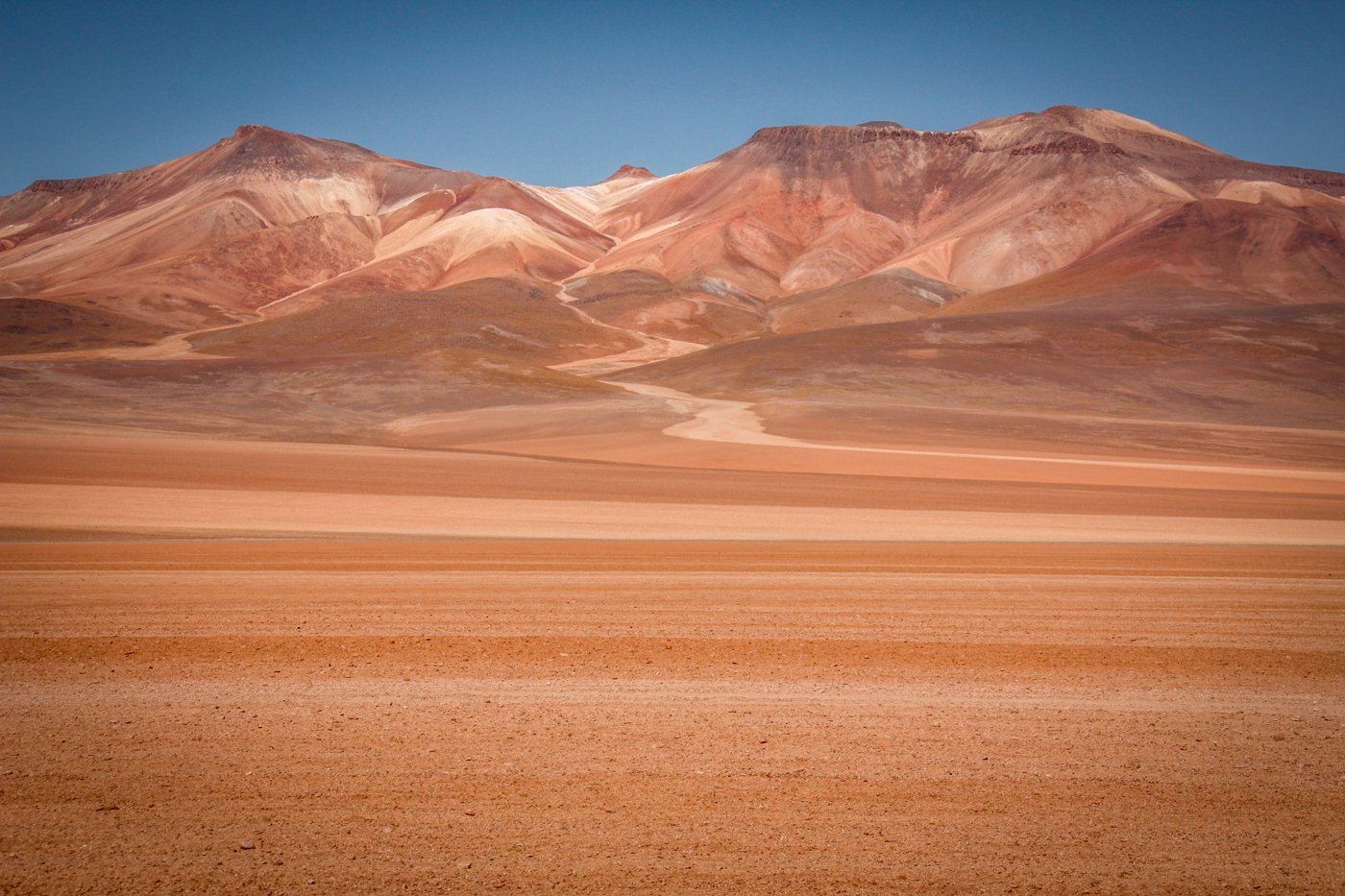 Another early morning and a long day of more lagoons and volcanoes brought a relieving descent in altitude. The main highlight of the morning was the Laguna Colorada, a beautiful red colour, achieving its color from sediment deposits and algae growth. We drove on for miles, stopping few times and watching the landscape became more flat and dry. 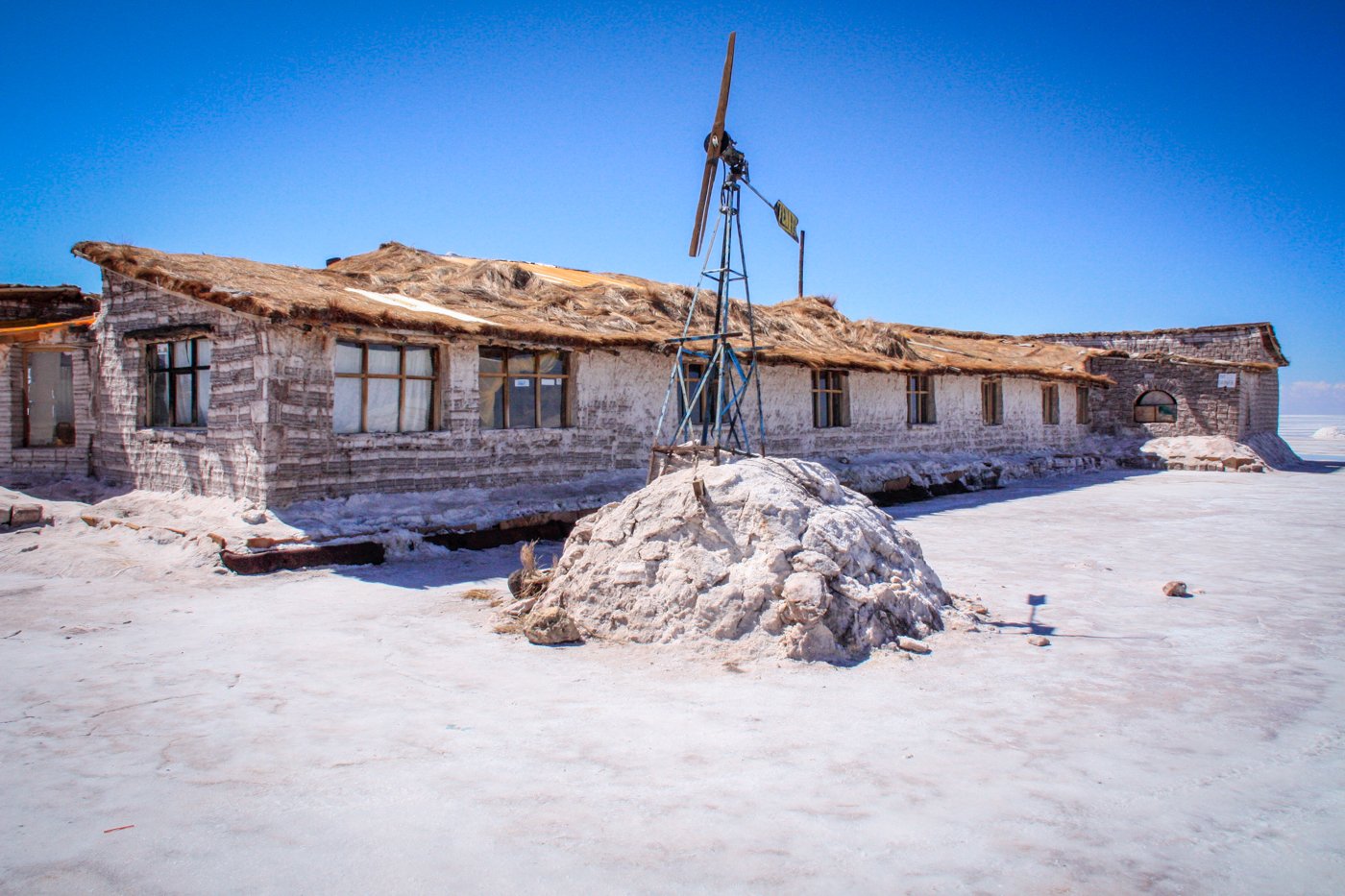 We arrived in the late afternoon at a village situated on the edge of the Salar de Uyuni. The entire structure was constructed of rock salt (halite) – the beds, floors, tables, chairs – the only thing not constructed of salt was the roof. The hotel had no heat (as usual) but we had a nice meal of hot soup, meat and rice and hot tea. We even had the chance for a short warm shower in what was essentially a cardboard bod with a hose in a tiny room. After dinner, everyone from the group went outside to see the stars and in the blackness, you could make out the streaks of the milky way. It was incredible. 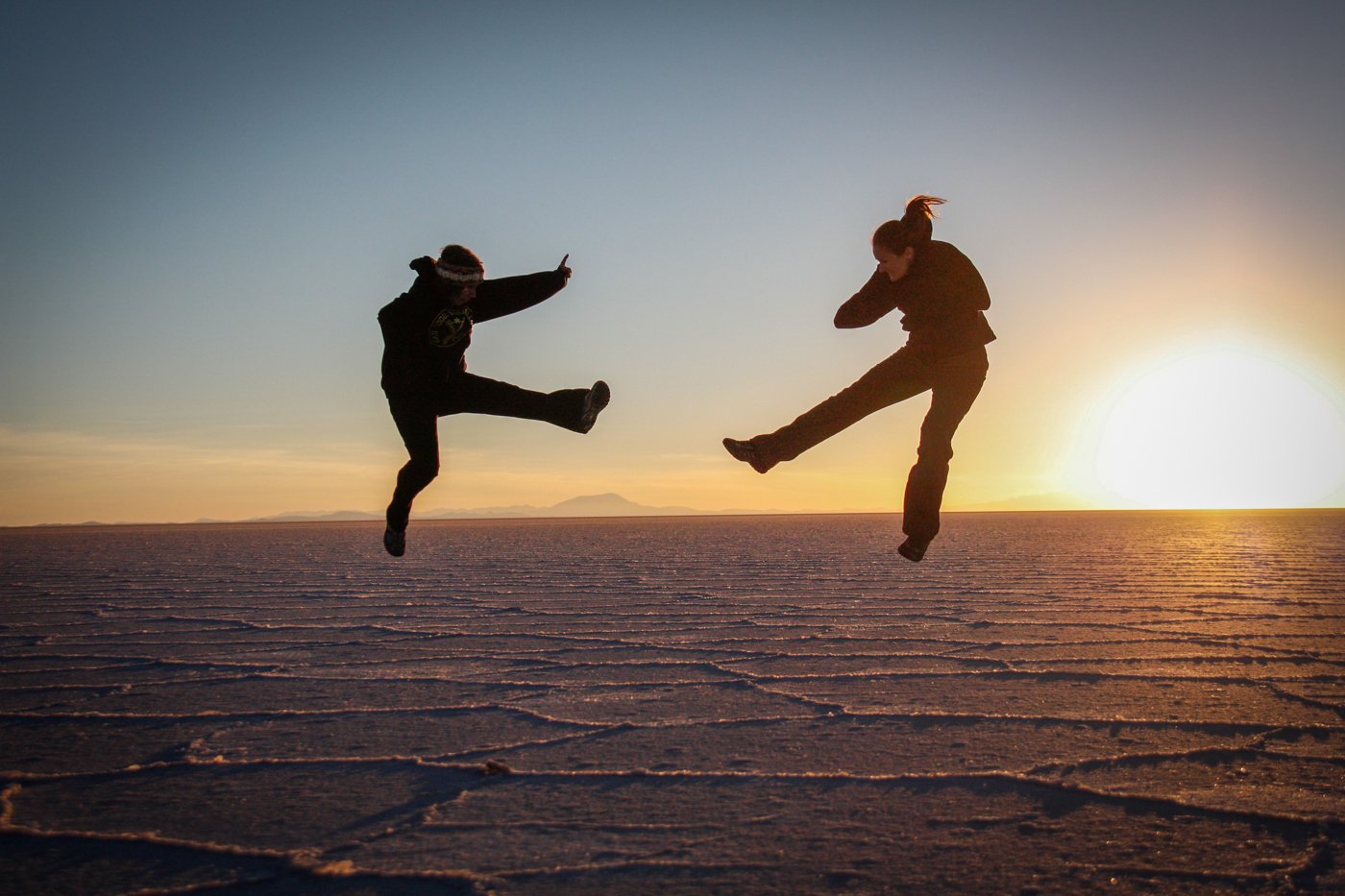 We woke up just before the sunrise to set off onto the Salar de Uyuni – a huge salt desert in the southwestern corner of Bolivia. The salt is as deep as 9 meters in some sections and stretches about 11,000 square km of pure white cracked salt. We drove out onto the Salar to watch the sunrise before heading to Isla de Pescada – a rocky “island” covered in huge cacti. We had breakfast there on some salt stone tables before continuing on.

We stopped in the middle of the Salar to where the salt stretches as far as the eye can see in all directions, its a bizarre and beautiful sight that tricks the mind. It’s hard to tell prospective and distance here and we took lots of the typical tourist perspective photos here. Afterwards, we travelled to the ‘official’ salt hotel, which is no longer active, for a quick visit and a final stop at the train cemetery where dozens of rusted trains lay rotting in a field. 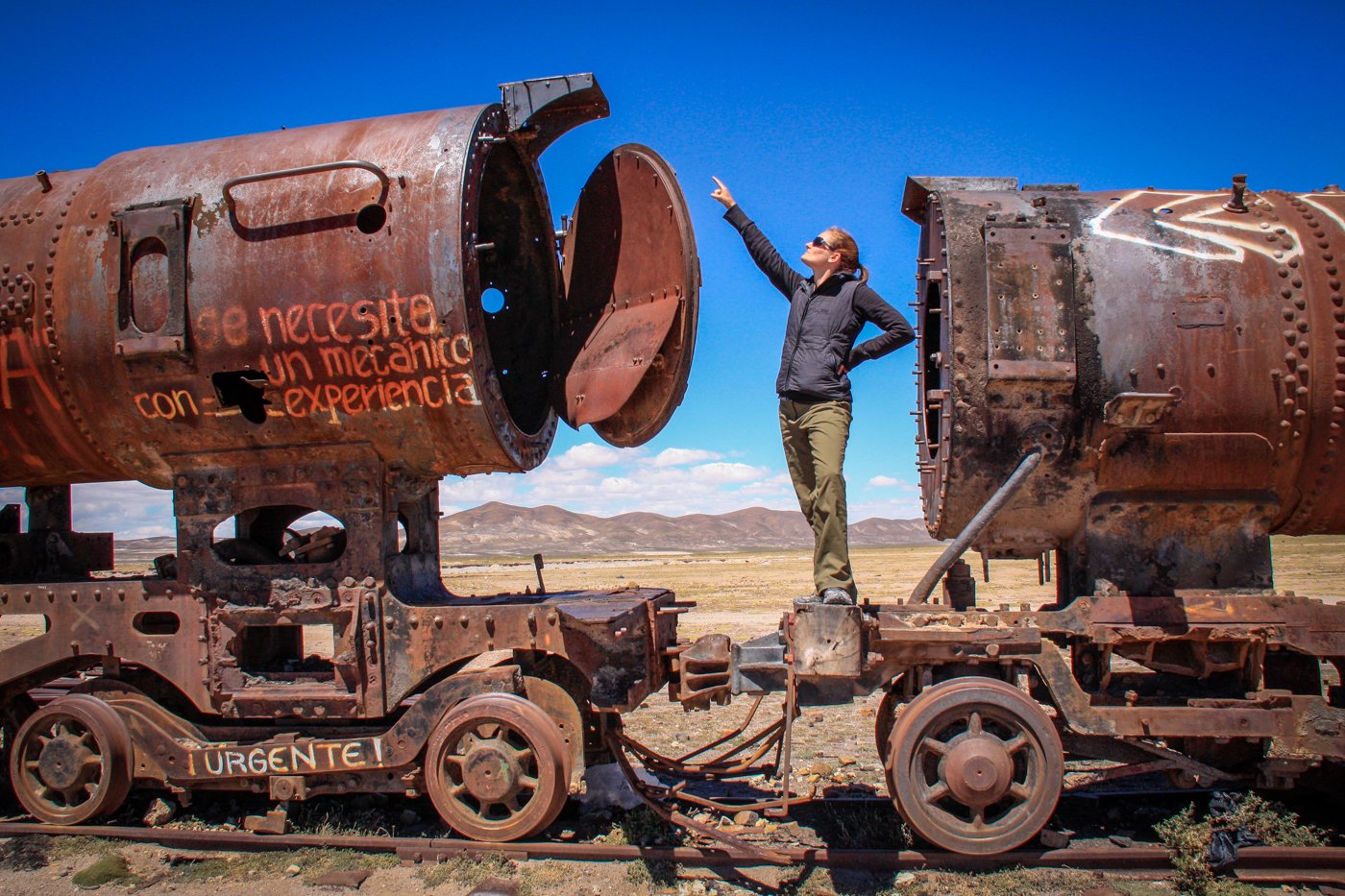 Our last stop was the town of Uyuni which had nothing terribly special about it besides having the worst public bathroom I’ve ever been to. We bought bus tickets and shopped in the street market to kill time. It was an incredible road trip from Tupiza to Uyuni through the Salt Flats. Rough, difficult and ruggedly beautiful, but very worthwhile.